As seen on the Heritage Insurance blog here is a lovely piece about Madame Elizabeth Junek.

In this third of the series of lady racing drivers, may I present to you Madame Elizabeth Junek, (Eliška Junková), born in 1900 and raised in Olomouc on the outskirts of the Austro-Hungarian Empire, with a passion for world languages and travel. Elizabeth met her future husband Cenek Junek, a Prague banker who, competed in motor racing and it was in Paris at the age of 21 where Elizabeth fell in love with Cenek and motor racing, taking racing lessons, whilst acting as her husband’s riding mechanic and by 1924 started racing herself. 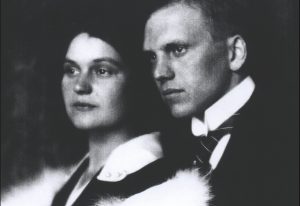 The pair bought a Mercedes and a Bugatti Type 30, in 1922, and painted the Bugatti yellow (said to be because of the clump of buttercups in front of the Chateau Saint-Jean in Molsheim when taking delivery of the car). 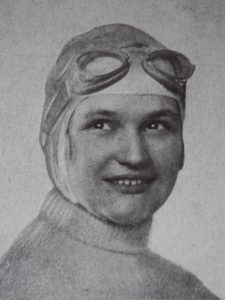 Her first race was at Pilsen (Western Czech Republic) resulting in a win in the touring car class. She continued in 1925, to compete in the Bugatti Type 30, known as ‘Babushka’. Her achievements on the track soon began to eclipse her husband’s. She won her first race in an ex-Strasbourg Grand Prix 2-litre Bugatti, at Zbraslav-Jiloviste, near Prague, later that year.

Between 1924 and 1926, Elizabeth competed in several Czech events and in 1926, took part in the Klausen hill-climb in Switzerland, achieving second place in her class, coming eleventh overall, after driving through wet, changing conditions for the duration of the twenty-minute climb. In 1927 Junek entered the treacherous Targa Florio in Sicily. The original Targa Florio began in 1906, as an endurance road race in the mountains of Sicily. It ran in various forms until it was downgraded to a round of the World Sportscar Championship between 1955 and 1973, and then a rally in its modern recreation.

Elizabeth acquired a new race car, from a heated discussion with Ettiore Bugatti about the inferior roadholding of her Type 30B which had an aerofoil-section bodywork, he agreed that the Juneks could choose a works car after one his race cars had completed the 1924 Lyon Grand Prix, so Elizabeth entered the 1927 Targo Florio with a supercharged Type 35B Bugatti. 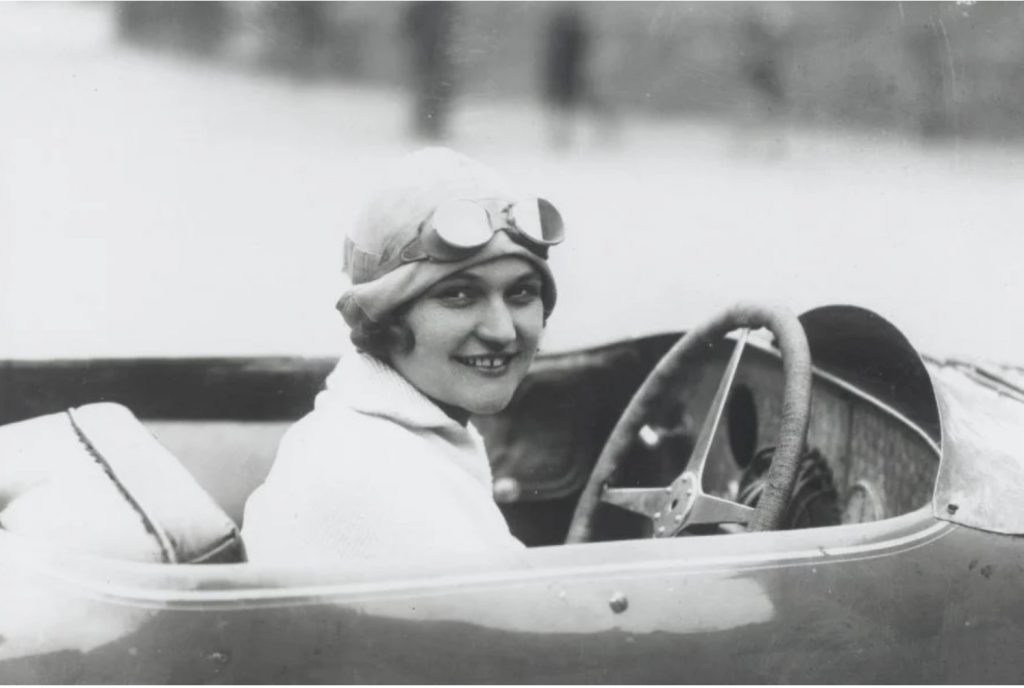 Now here is where I begin my fascination with Madame Junek. I am always keen to discover the trailblazers who set new standards and inventions for what we have come to know as an everyday piece of equipment on the car.

Elizabeth Junek is one of the first drivers to make a reconnaissance along the roads of the sixty-seven-mile route, taking note of the terrain, creating pace notes, memorising the corners, and noting any hazards with white chalk marks on the rocks, pavements and building edges. The Juneks spent a month preceding the race, practicing daily the twists and turns both on foot and in the Bugatti.

The first-ever driver to “walk the course.” 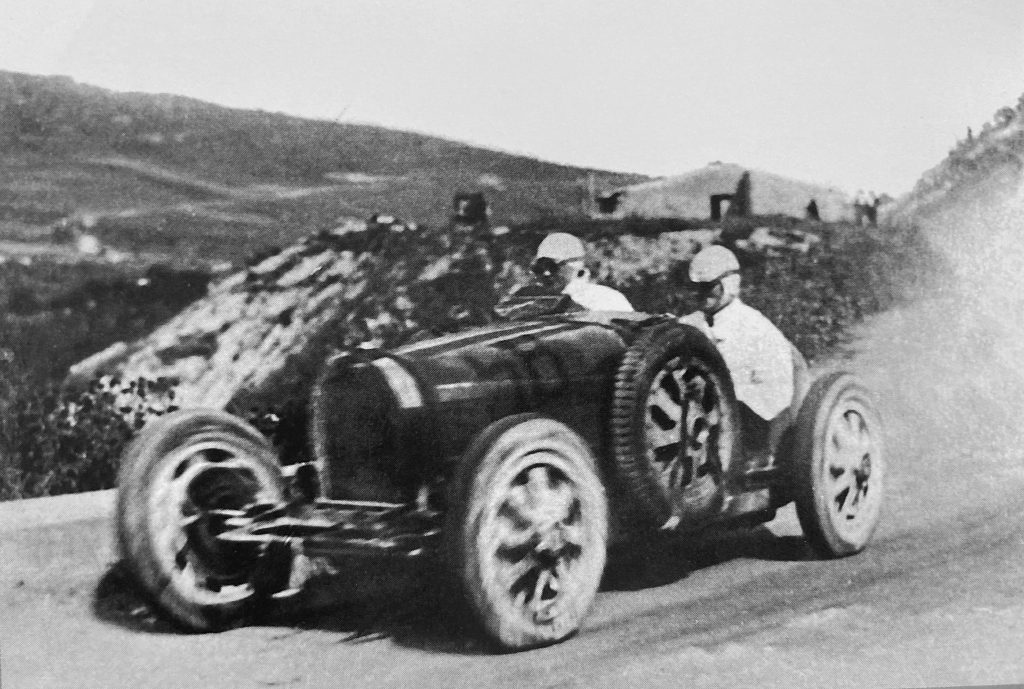 The 1927 Florio race was short lived however for the Juneks, at the end of the first lap, Elizabeth was lying fourth, 34 seconds behind the leader Minoia, who was closely followed by Dubonnet and Materassi. However, steering failure developed, and on the second lap she retired from the race.

The Targa Florio inspired Junek for her next race later that year with such confidence and her fourth place at the German Grand Prix at the new Nürburgring circuit, was a super result. She won the 2-litre class, being the first woman to win in a Grand Prix event. 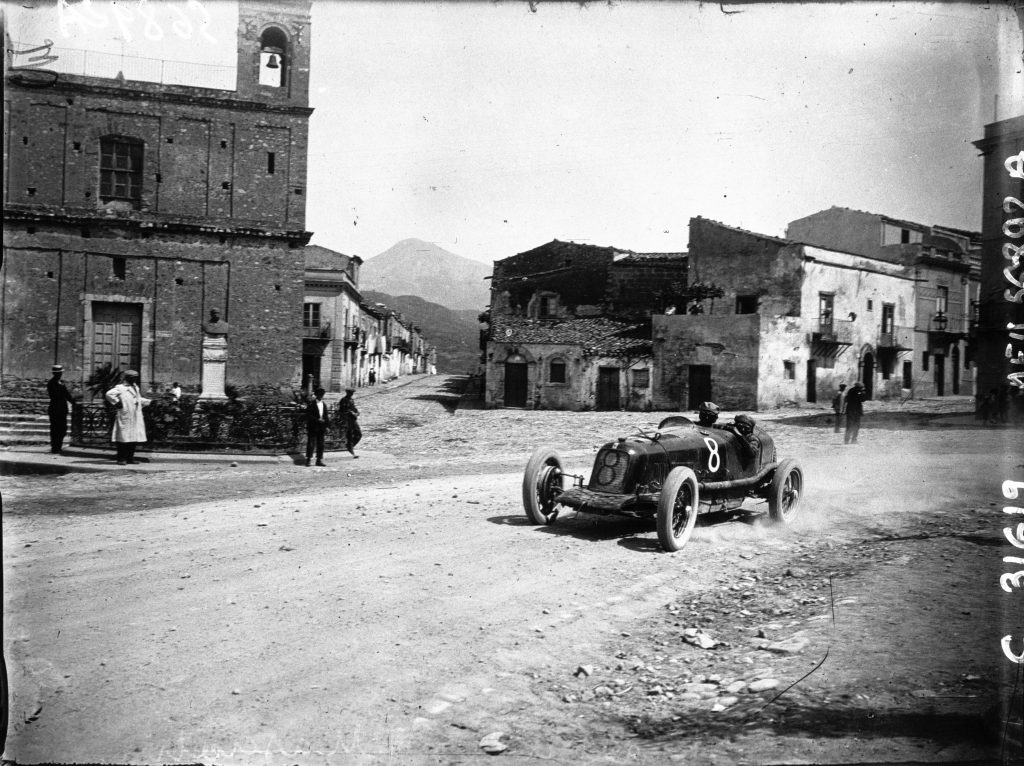 I am so happy to have an in-depth race report of both 1927 and 1928 Targa Florio because in 1928 Elizabeth Junek returned to the Sicilian course fuelled with knowledge of the course, which cemented her nickname of ‘Queen of the Steering Wheel’. Her first attempt although retiring early, her speeds were fast and in the second year even faster.

Two lady drivers entered in the 1928 race, Junek in her yellow and black supercharged Type 35B and the German Countess Margot von Einsiedel in a 1.5-litre supercharged Bugatti. 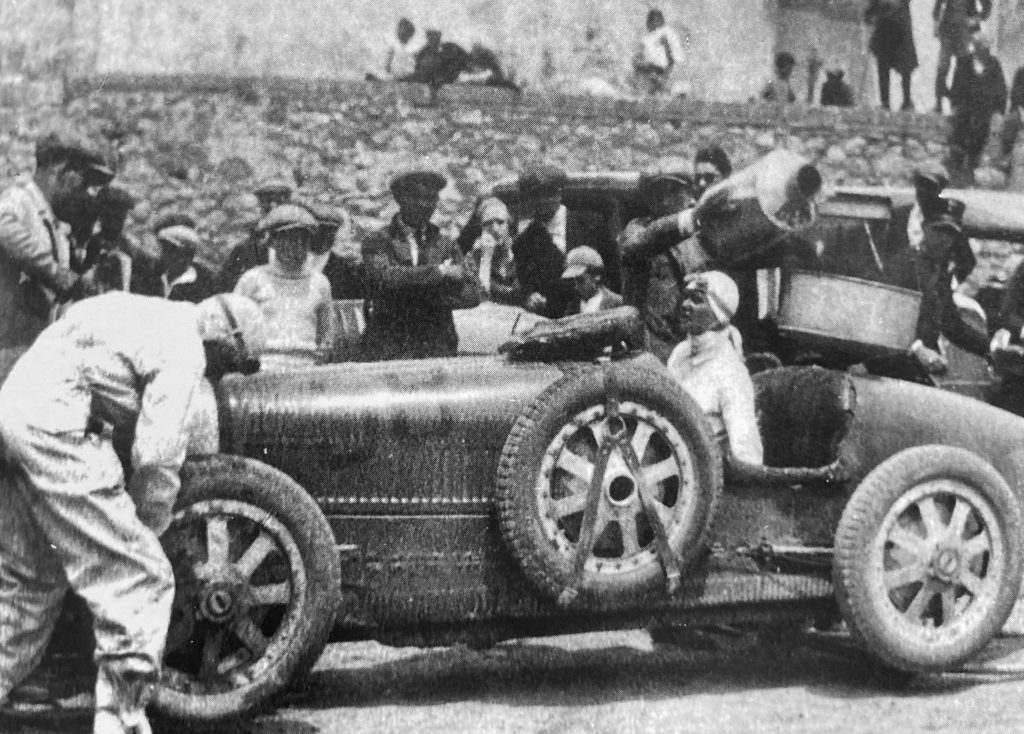 Following from Elizabeth’s  walking of the course the previous year, many of the drivers  in 1928 took to practicing days before the actual race including Count Caberto Conelli, and the winner of the 1927 Florio, Emilio Materassi, along with Tazio Nuvolari, all practiced the course, all following Elizabeth Junek’s idea of reconnaissance. 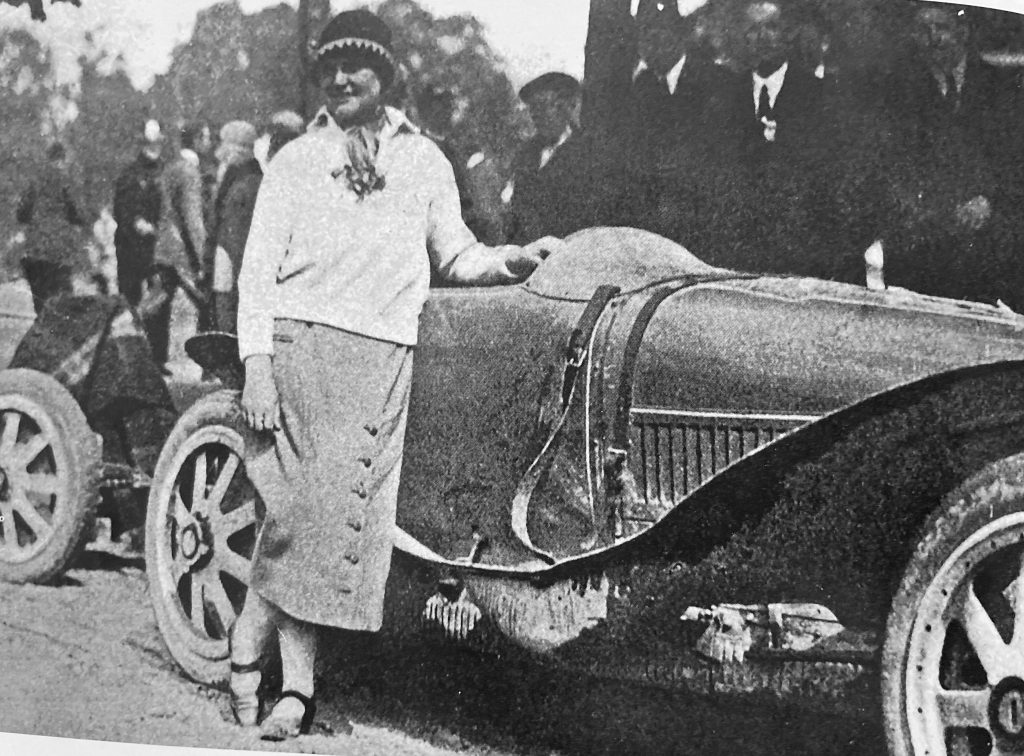 The mapping of the corners, where to turn, where to slow, here we have the very beginnings of the GPS, of the Tulip maps, before the Sir Stirling Moss and Denis Jenkinson ‘Jenks’ use of a toilet roll contraption made infamous in their 1955 Mille Miglia race of which they won in their Mercedes 300SLR car number 722. Madame Junek started a trend to create a physical memory of the route – today we have satellite navigation, but in 1927, this was most unique.

We have a wonderful race report of the 1928 Targa Florio includes drivers such as Louis Chiron and Luigi Fagioli  (the oldest man to win a Formula One race also known the ‘Abruzzi’ Robber) and Ernesto Maserati who, finished eleventh in his own marque.

We join Junek after lap two, leading the race for some time ahead of Chiron, who lost his car on a sandy bank, Nuvolari broke a piston, and by the third lap “Campari had turned a fantastical third lap in murderous tempo which brought him to the top” with Junek now in second place. Let us take note that Junek had started in fourth position in her supercharged Bugatti Type 35B.

By lap five, the final lap, whilst Junek had been in second place, she was 20 seconds ahead of Campari’s red Alfa Romeo and Divo’s light blue Bugatti in third place.

“Campari in his red Alfa Romeo was the first to finish the race and received thundering applause, all believing that he was the overall winner; he was filmed and celebrated. Then there was the agonising wait for the other three rivals. Campari had started 40 minutes ahead of Divo and 42 ahead of Junek.”

“The cannon-shot sounded and Count Conelli appeared at tearing speed, so that he could only come to a halt past the grandstands, but his noble effort was not sufficient. Campari was 17 seconds ahead of him. The wait continued for the two mighty rivals who remained unaccounted for: Divo and Junek. Surprises could be expected from both due to their knowledge of the circuit and their good times up to now. The possibility was even pondered that Mrs. Junek could still win, if she drove an especially fast lap.”

However, it was not to result in a winning place since a tire failure and loss of coolant had impeded her progress on the way. The water pump had caused trouble, and the mechanic went to fetch water to top up the radiator. Her delay enabled Conelli and Chiron to move forward to third and fourth places. 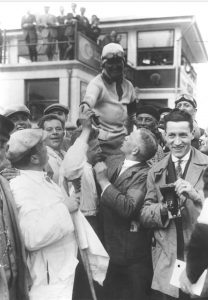 The results in 1928 show in first place Alberto Divo (Bugatti T35B), second place Giuseppe Campari (Alfa Romeo 6C-1500MMS) third place Caberto Conelli (Bugatti T37A),  fourth place Louis Chiron (Bugatti T35C),  fifth place Elizabeth Junek (Bugatti T35B) and in twelfth place Margot Einsiedel (Bugatti T37A). Vincenzo Florio warmly congratulated her at the finish and, begging Divo’s pardon, called her the moral victor of the day. The race report is captivating, it shows me that Junek was a very fast lady, keeping up with the ‘works drivers’ of that year. Although Tazio Nuvolari, had broken early in the race, she was still ahead of him.

Elizabeth, two months later, returned to the Nürburgring for the German Grand Prix, sharing the driving with her husband running as a sports-car race. On the fifth lap, having just changed places with her, Cenek was rushing to make up lost time after a tyre change. He went wide at the Breitscheid corner, hitting a rock and rolling, being thrown out of the car, he collapsed and died soon after from a head injury. Elizabeth was devastated and gave up racing immediately selling all her vehicles and returned to her first passion of travelling.

Ettore Bugatti gave her a new touring car for her journey to Ceylon and hired her to seek out new business opportunities in Asia.

Elizabeth eventually found love again and married Czech writer shortly after the Second World War. But from 1948 to 1964, the communist authorities, refused to allow her to travel abroad. Finally in 1969 she attended the 40th anniversary of the Bugatti Owners’ Club in Great Britain

In 1973, she published her autobiography Má Vzpomínka Je Bugatti (“My memory is Bugatti).

“I proved that a woman can work her way up to the same level as the best of men. We women sometimes tend to blame our failures on nature. It is far more productive to be less angry and more hardworking. Some handicaps can easily be overcome.”

Bugatti released a Veyron Grand Sport Vitesse in 2014 at the selling price of £1.8m  to celebrate the life of Madame Junek, with yellow and black two-tone details with a nod to the yellow Bugatti fleet owned by the Juneks.

With fifteen women entering the Targa Florio over the years, these women are of note: