Dorothy Levitt – The Woman and the Car

As soon as Michelin and Dunlop fitted rubber tyres to wooden wheels, speed became the must-have accessory. This edition will introduce some of the women who pioneered this new fashion. I have always thought of my research as Mirror Lipstick Manoeuvre, but I think you will find that these women are far more pioneering – and certainly more intrepid – than a dash of face paint.

I’ll begin with Bertha Benz, the wife and business partner of Karl, and the first woman documented to drive a motor car solo. She undertook a journey of 180km through Germany to see family, repairing the leather drivebelt en route, along with unblocking the carburettor with a hat pin, refuelling with Ether at a chemist and insulating an electric cable with one of her garters. All whilst her husband was unaware of the expedition until her arrival later that evening.

Duchess d’Uzes passed her driving test in 1898. Only a couple of months afterwards, she was whistled down by a policeman for speeding along an Avenue in Paris, doing a relentless 12km/h. In 1926, she formed the first Ladies Automobile Club in Paris.

Finally, amongst my pioneers is Camille Du Ghast, the first woman racing driver who participated in the 1903 the Paris Madrid race, where 207 participants took to the dusty streets, Du Ghast in her Dietrich 35CV. She later went on to race a Benz Parcifal and a Darracq-powered Marsouin, considered to be extremely fast amongst the male competitors. Du Ghast is perhaps why Selwyn Edge wanted to pop a lady into one of his Napier cars here in the United Kingdom.

Originally a secretary for the Napier company, Edge decided to try Ms Dorothy Levitt out, perhaps for the publicity or perhaps from her insistence. 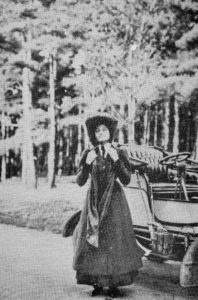 Ms Levitt broke the women’s speed record in 1906, reaching 91mph in her ninety horsepower six-cylinder Napier. She personified a new type of liberated women: ‘scorchers’, as they were called – female racers who lived for speed.

‘There is a feeling of flying through space,’ Ms Levitt was recorded saying in November 1906. ‘I never think of the danger. That sort of thing will not do. But I know it is omnipresent. The slightest touch of the hand and the car swerves, and swerves are usually fatal”.

Edge was correct; she was fast and was doing wonders for his sales too. From marketing campaigns for his car and for soap, Ms Levitt was indeed a great spokesperson for the pioneering woman.

These women were practical, too. Ms Levitt advised her fellow ladies to ‘carry a little hand-mirror in a convenient place when driving,’ so one could ‘not only put one’s lipstick on but to hold it aloft from time to time in order to see behind while driving in traffic.’

Soon enough, the rear-view mirror was born, though it was not introduced as standard for another five years.

Other women of influence include Claretta Petacci , the mistress to Mussolini. She inspired the design of the Alfa Romeo 5C, Incidentally, this was the car that both Petacci and Mussolini were shot down by the resistance as they attempted to escape in 1945, at the end of the Second World War. The Spirit of Ecstasy (the silver figurine at the front of the Rolls Royce), was inspired by Eleanor Thornton, a muse amongst the social elite. In 1909, she was immortalised by artist Charles Sykes, ‘she leans forth towards the wind, arms outstretched, her dress billowing as if in flight. A symbol of dreams – of energy, grace and beauty.’ 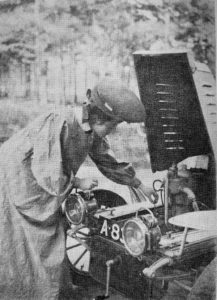 However, I return to Miss Levitt, who in the same year wrote, ‘The Woman and the Car: A Chatty Little Handbook for all Women who Motor or Who Want to Motor’. The book recommended novel ideas such as holding the mirror, but also advised women travelling alone to carry a handgun; Ms Levitt’s specific recommendation was an automatic Colt. In her opinion, its relative lack of recoil made it particularly suitable for women.

This little handbook does indeed hold some helpful advice for women being whirled around the country by one’s friends and relatives, or in a car driven by one’s chauffeur, although Levitt remained insistent that, ‘the real, intense pleasure comes only when you drive your own car.’

The book goes on to explain how to not injure yourself as you start the car with the starter handle, and how to change gear using the clutch to match the engine, all whilst steering at the same time. Levitt discussed road manners too, for pedestrians and other road users; in 1909, the motorcar was a new invention on the road, so there would have been chickens, horse, and sheep in many streets, especially those around villages.

Ms Levitt also addressed the question of what to wear, claiming that, ‘with an open car, neatness and comfort are essential. Under no circumstance wear lace or fluffy adjuncts to your toilet. There is nothing like a thick frieze, homespun or tweed coat lined with fur.’ When it came to gloves, Ms Levitt told her readers to ‘never wear woollen gloves, but gloves made of good soft kid. You will find room for these gloves in the little drawer under the seat of the car. It is not advisable to wear rings.’

I love the fact that from the off, Ms Levitt ensures that women made their own repairs to the mechanics of the automobile, insisting that ‘indispensable to the motorist is the ‘overall’; this should be made of butcher blue linen in the same shape as an artist’s overall. The details of an engine may sound complicated and look “horrid”, but an engine is easily mastered.’

Miss Levitt also has an extensive list of accomplishments. As well as obtaining her pilots license and winning at Cowes, in a Napier Motorboat in 1903, she won the inaugural Brighton Speed Trials in July 1905 in a road-going Napier, setting a new Ladies World Land Speed record of 79.75 miles an hour. 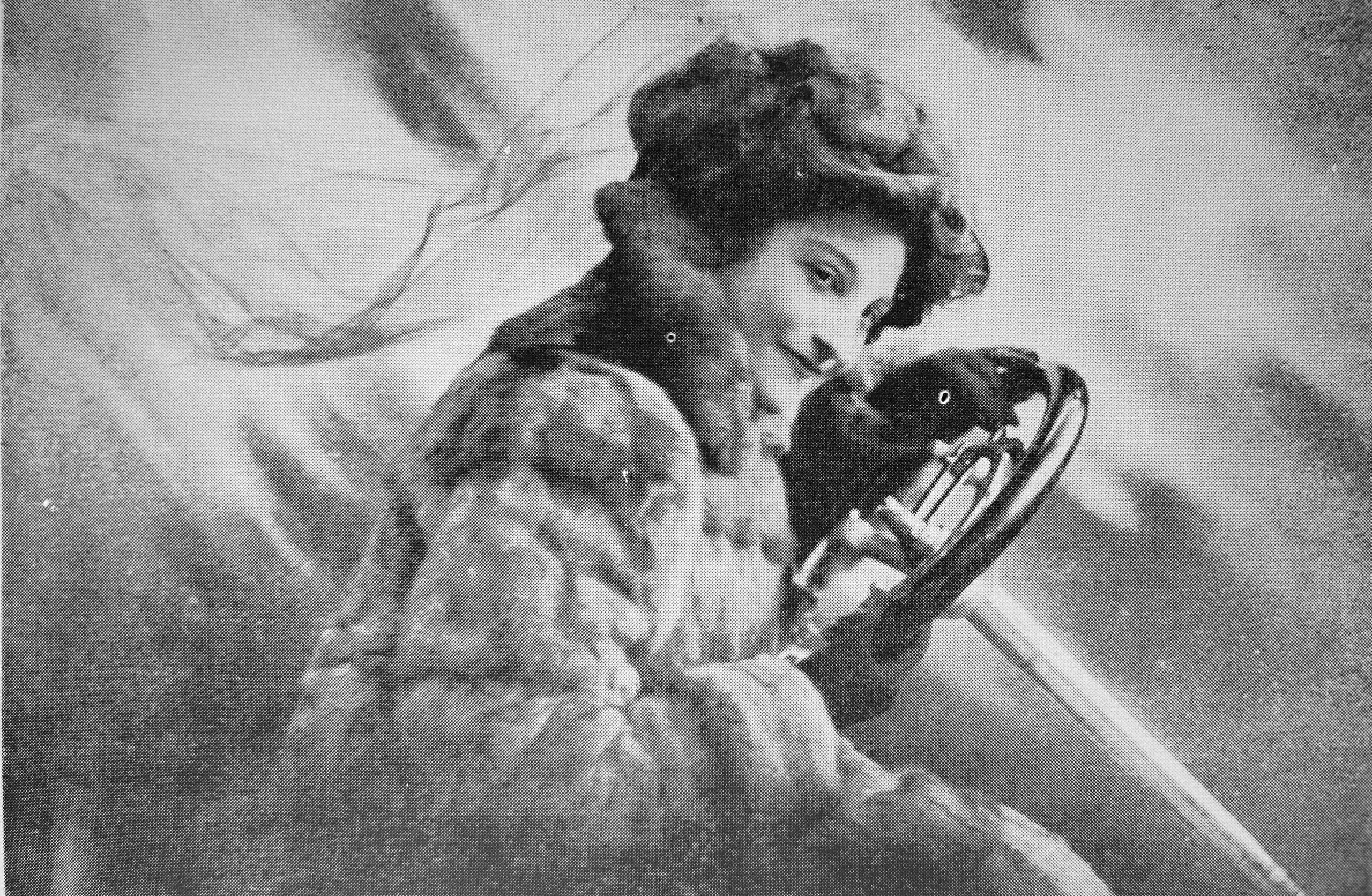 The same year Dorothy proved the record for the longest drive achieved by a lady driver. She drove an 8-horsepower De Dion-Bouton from London to Liverpool and back in two days, without the aid of a mechanic, but accompanied by an official observer, her pet Pomeranian dog Dodo, plus a revolver.

Departing from the De-Dion showroom in Great Marlborough Street London at 7am, Miss Levitt arrived at the Adelphi Hotel in Liverpool at 6:10pm, having completed the 205 miles in a little over 11 hours. The following day she completed the return journey.

At the Blackpool Speed Trial, she broke her own Women’s World Speed Record, with a recorded speed of 90.88 mph, whilst driving the 100 horse-power Napier K5-L48. She was described by the the automotive press as the ‘Fastest Girl on Earth’ and the ‘Champion Lady Motorist of the World.’

In 1907, the newly opened Brooklands circuit would not accept her entry. Even though she was guaranteed by S. F. Edge, Brooklands continued to reject women drivers until the following year. It was Ethel Locke King who, after her husband initially orchestrated the concept of Brooklands which led him to a nervous breakdown, got the first British racing circuit up and running, and was the first woman to drive her 1904 Siddeley 2-seater tourer (famously named Daisy) round the track. Before I move on from Mrs Locke King, I think it is because of a woman that we have Brooklands; she was so very instrumental in creating his vision of the banking and a centre for British engineering excellence.

Alas, we return to Dorothy, who after finishing second in the Bexhill on Sea Speed Trial in her eight horsepower De Dion, was finally allowed to race at Brooklands in 1908. She raced in a specially prepared race called the ‘Ladies Bracelet Handicap’, where she piloted a 45 horse-power Napier and won a silver plaque.

‘It would have been very improper to show one’s knees aboard a car that was already stripped of any bodywork and would have not hidden anything,’ remarked Dorothy to a fellow racing driver that day.

As well as their coloured scarves, the ladies tied cords around their dresses to hold up their skirts. 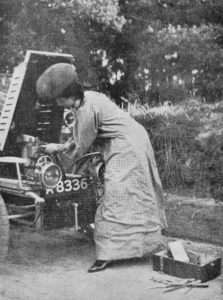 Eight women raced at that inaugural race at Brooklands, with Muriel Thompson winning in her Austin, with Ethel Locke King not far behind in her Italia. It was not until 1920 that Brooklands allowed mixed gender racing. Even then, female drivers were required to have a male mechanic on their team.

Dorothy Levitt had a busy year in 1908. In July, her 60 horse-power Napier was second fastest of over 50 competitors at the Aston Clinton Hill Climb in Buckinghamshire. She also raced at the La Côte du Calvaire hill climb at Trouville in France, as well as for the Prinz Heinrich Trophy at the Herkomer Trophy Trial in Germany.

Strangely, although Selwyn Edge continued to manufacture and race cars, we have very little documentation of the life of Miss Levitt after 1910, although her image was still used extensively for advertising soaps, tyres, and driving attire for ladies, whilst her publishing and journalism was fluid with articles and public speaking events.

I love imagining how Ms Levitt would visit ladies’ luncheons, reading extracts from her book ‘The Woman and The Car’, advising keen motorists how to use the side brake and clutch, how to use the brakes and how to keep one’s dignity whilst parking.

In 1922, she was sadly found dead in her bed at 50 Upper Baker Street in Marylebone, unmarried. Her death certificate stated that ‘the cause of death was morphine poisoning while suffering from heart disease and an attack of measles. The inquest recorded a verdict of misadventure.’ Her estate would be valued at £12,300 in today’s money.

What a life she had, part of the trailblazers and wayward women of the late Victorian era. In the next edition, I shall delve into the life of Madame Elizabeth Junek.