Imagine Charles Rolls, Vincenzo Lancia and the brothers Marcel and Louis Renault, rush past your eyes amongst the Paris Madrid Rally then fast in pursuit comes Chamille Du Ghast, the first female racing driver. Hellé Delangle carefully gripping the hand of her school teacher as she watched on the side of the road in the Beauce Region to the South West of Paris at the age of three. The year is 1903, could this be her first glimpse into what would become her life-long ambition?

When I was asked to write about some of the fabulous historic women racing drivers that inspire me, I decided that Hellé Nice (her stage name) ought to be top of the list. You see, somehow, I feel like I know this Bugatti Queen, how she would have drank her coffee and ate her baguettes at breakfast and how she would have carried her lone leather suitcase from apartment to apartment after all her disillusioned relationships. I almost feel that I know her character or that I had seen a film about her but – in fact, it’s all because I have read so much about this remarkable lady’s life. 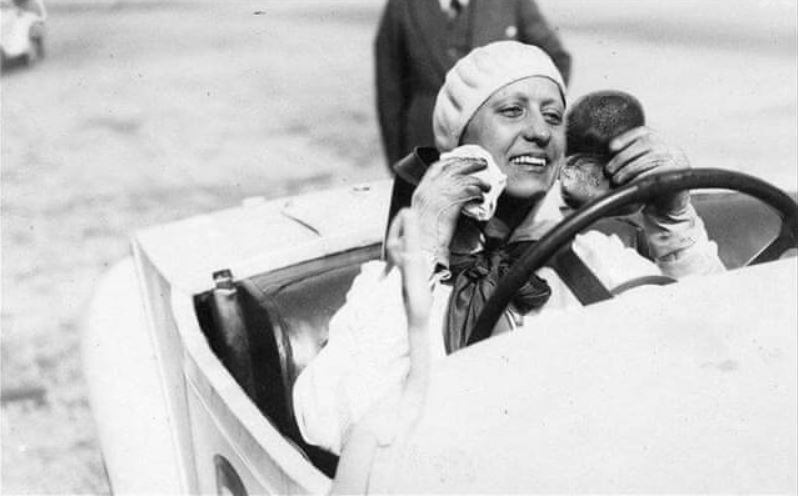 Let’s begin with a Hellé Delangle, who danced at the Casino du Paris where she earned her celebrity. With her earnings bought a little Citroen in 1920, the start of her motoring passion.  In an automobile accessories shop owned by Henri Coucelles a former WW1 pilot, she met Philip de Rothschild and the three of them soon became the greatest of friends.

After Courcelles had entered the Le Mans 24 hours in a Lorraine-Dietrich, he and De Rothschild started to get Hellé into racing.

In 1921 she went to Brooklands and sought to enter a race. But when her application was rejected because she was a woman, she was infuriated. Her fury maintained throughout the 1920s. She raced when she could but was never allowed to compete amongst the men. Instead, skiing to fulfil her passion for speed.

Being a showgirl, she jumped at the chance of publicity for Jules Daubecq and the Omega marque and took part in the Women’s Grand Prix race at Montlhery, now in its third year in 1929. She won it. Passing the American Lucy Schell, Mrs Ferrand in her Amilcar and the Olympic athlete Violette Morris, in the Donnet. Daubecq was correct in thinking that a glamourous woman would help shift stock especially as his car had won the race.

“The driving was magnificent: nobody who saw it would feel able to argue that women drive less well than men,” wrote the newspaper L’Intransigeant.

Although Hellé had driven the Omega 6, her winning blue eyes caught the attention of Ettore Bugatti and he famously proclaimed,

“The perfect match for the colour of my Bugatti” and he entrusted her there and then with a Type 35C Grand Prix.  Amongst a host of different Bugatti’s she drove a variety of cars however, an Alpha Romeo, Monza, Supercharged Miller and a Hispano for her daily.

“It’s all I ever ask for, just to show what I can do without a handicap against men,” said Nice in 1930. At the time she was one of the most famous women in the world.

Junek’s retirement from racing Hellé Nice was a perfect match to continue the face of Bugatti.  Hellé Nice entered 31 major Grands Prix between 1931 and 1936, driving either a Bugatti or an Alfa Romeo. 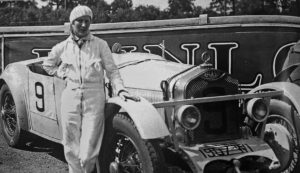 In 1930 she went to the US to race on dirt tracks in supercharged Miller cars. Initially she was signed as a salaried exhibition driver, taking the wheel without any helmet “because the crowds always like to see my hair when I am driving.”

She signed another massive advertising deal, this time with Esso, and became known as the Bugatti Queen. Wealthy and now globally famous, she returned to Europe in 1931 with the determination to be taken seriously as a Grand Prix racer.  In the first Grand Prix of the season she finished fourth in a race at Reims that featured top drivers Philippe Etancelin, Rene Dreyfus and Louis Chiron.

Although she won the women’s races time and time again, she never actually won a mixed race in her Bugatti 35C, however Nice always the centre of attention, often stealing the limelight from the actual winners.

Among her lovers were Jean Bugatti (son of Ettore Bugatti) and Philippe de Rothschild. Letters exist between L’Ebe Bugatti, Jean’s sister, and Hellé Nice, one of which mentions some particularly good ham that was served. No-one really knows what went on between Hellé and Jean, as Jean died shortly afterwards in a testing accident.

She raced in Europe and the East coast of America partying at the time was as a matter of course and along with a number of affairs her career no sooner had it started to take shape it was soon to take a turn of events that changed everything. I mean already her story is either from a film ought to be in film.

In 1936, she raced an Alfa Romeo in the Sao Paolo Grand Prix when her car struck a hay bale and catapulted into the crowd, killing several spectators and injuring dozens. Nice was thought to have died as well, but she had landed on a victim whose body protected hers. Nice was in a coma for two days and hospitalized for two months, the severe head injuries she had sustained, coupled with damage to her reputation, left her unable to find a manufacturer willing to take her on. 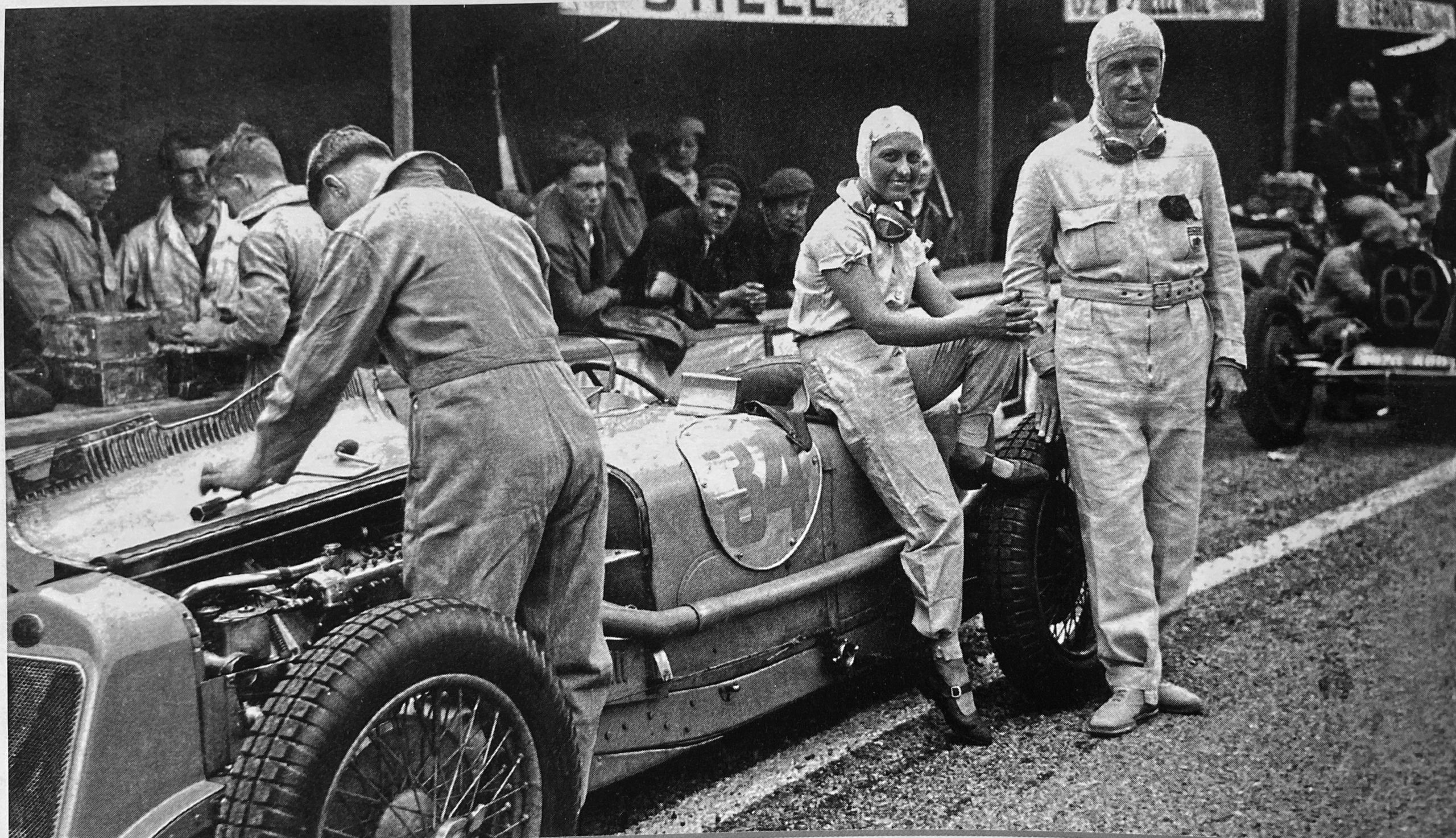 Her return to motorsport was slow and tentative. Her first comeback event was a speed trial at Montlhery, driving a huge Matford with a 1700cc diesel engine. She was part of a four-woman team with Claire Descollas, Odette Siko and 27-year-old Simone des Forest. They set a series of speed and endurance records over three and eight days, breaking 10 records that still stand today. The trials did not always run smoothly; Claire Descollas dropped out early on and neither she nor the Simone des Forest got on well with Hellé. Only Le Mans pioneer Odette Siko found her easy to work with and the two reportedly became friends.

Whilst Hellé Nice may be famous for the Bugatti 35c, she raced in 1938, a German DKW with the womanising Baron Huschke von Hanstein – known for his success with BMW,   then the war came and she disappeared.

Afterwards when at the 1949 Monte Carlo Rally Gala where she had raced a small 4CV Renault, her ‘so called’ friends Yvonne Simon and Anne Itiere accused her of being a Gestapo agent during the war and the damage was done.

Her life never returned to the glamour that she knew and she finally ended up desolate and alone in Nice. How she got through World War Two without suffering too much interference from the Nazis while they occupied France remains a subject of intense debate.

Allegations that she had been a Gestapo spy, made against her by the Grand Prix driver Louis Chiron on the eve of her planned comeback at the 1949 Monte Carlo rally, were untrue. Violette Morris (Hyena of the Gestapo) the butch Olympian athlete who drove the BNC Cyclecars, had indeed been collaborating with the Germans and died at the wheel of her supercharged 15 in a hail of Allied bullets in 1944, whilst Anne-Cecile Itier also had an affair with Von Hanstein, during a rally in Morocco. Perhaps at this time many conversations and love affairs and duties were unclear.

But despite being false, Chiron’s claim swayed any potential sponsors. Her career was effectively over. 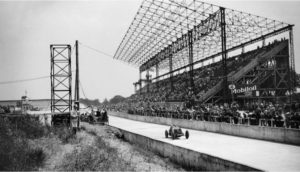 The final 35 years of her life were a slow decline, made worse when her lover left her for a younger woman in 1960 with all of her money. Penniless, she came to rely on donations from an actors’ charity. At the age of 75, she was forced to move into an attic in a run-down part of Nice, where she later died, aged 83.

Neighbours told her biographer, Miranda Seymour, they remembered seeing Nice “taking the milk out of the cats’ saucers because she had nothing to eat or drink.”

I suppose I wanted to put Hellé Nice at the top of my list to ensure that her name is still remembered as a trailblazer and an inspiration to all young ladies who are determined to overcome society’s barriers. She was fast, glamourous and by all accounts a great personality.

With over 31 Major Grands Prix raced between 1931 and 1936, driving either a Bugatti or an Alfa Romeo, Hellé Nice might just be the Bugatti Queen indeed.