Mrs Christian Miller, a well-established lady bought a fold up bicycle, a tent and a saddle bag and cycled 4,500 miles across America just after WW2, whilst earlier Mrs Edith Fraser Benn, in 1901, rode side saddle from India to Persia, a 600 mile camel ride with her whole household along with a Fox Terrier. From intrepid travellers such Amy Johnson, the Aviatrix of Hull to FJ Erskine who, in 1888 began writing books for ladies who wished to be women ‘awheel’ swerving themselves around Europe and far beyond, writing tips and ideas of survival and amusement.

Perhaps the most famous of all these wayward women (in the 2 wheel world), is Peggy Iris Thomas – otherwise known as Gasoline Gypsy, along with Oppie the motorcycle, Matelot the Airedale, they sniffed their way around 14,000 miles of the United States, Mexico and Canada. She went on to compile her diary into a book entitled ‘A Ride in the Sun’. Back in print after 60 years, the rise of the intrepid traveller is firmly in vogue. “There is a touch of vagabond in all of us” said Peggy. 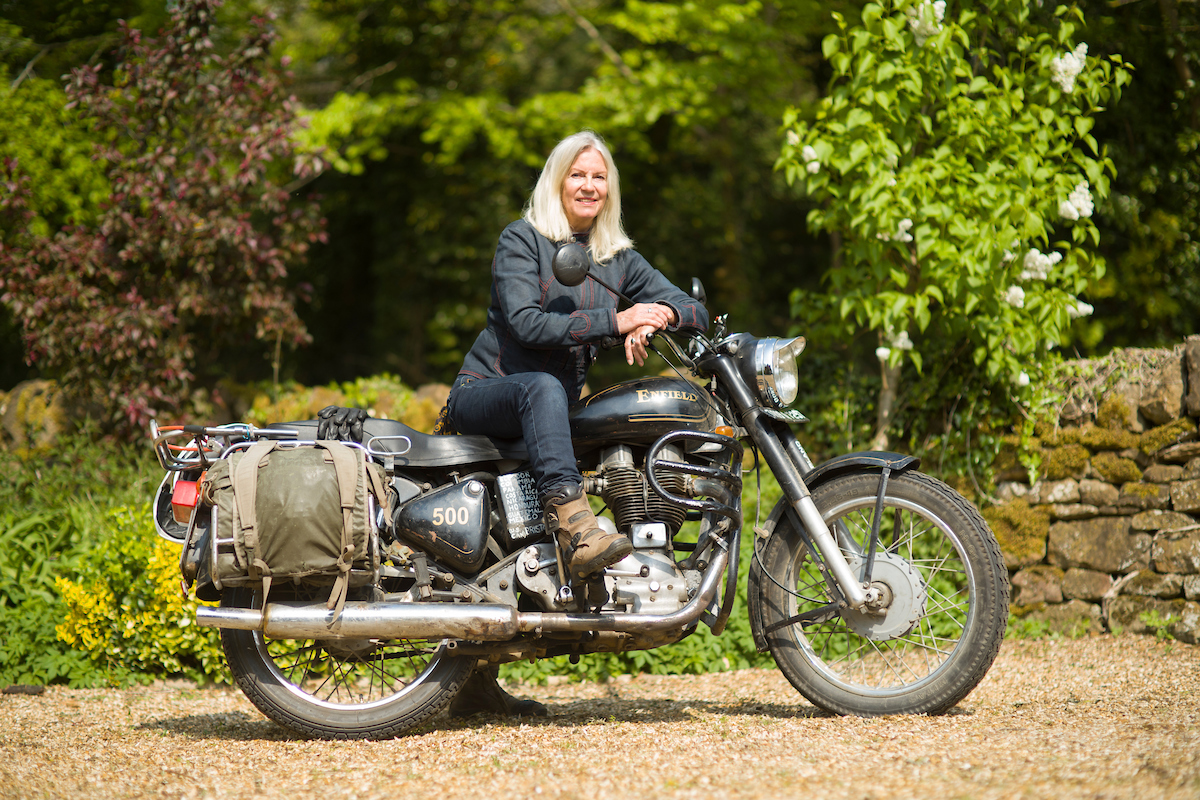 Whilst many travellers today have taken on the ‘Van Life’ trend (even my parents went off for one year in their motorhome and returned after twelve, having seen most of Europe from the comfort of their own pace cocooned of their immediate necessities, returning purely for family duties), caravans, vans and motorhomes may seem to be hindrance for the true open road to freedom.

When I met Jacqui Furneaux at an Adventure Overland show recently where, compete with her trusty Enfield motorcycle beside her, I learnt that she had just returned from her latest travels on the said bike, but the adventure began in India where she would take over seven years to return to Bristol, I was most intrigued, not because of her being a woman, but simply because of today’s political climates in the countries of which she ventured into for her journey home and for me, my automatic thought is always “My camera kit takes up so much luggage how would I cope?”

Her latest travels in Australia, over six months, a place where she returned to after learning a friend was there on his Enfield motorcycle, she thought it would be jolly fun to join him, seems a breeze compared to some of the stories she tells on her long seven year journey, after all, Jacqui is now a well hardened traveller and is accustomed to anything that might get thrown at her.

“I went to the Furneaux Islands in Tasmania to see what I could find about my ancestry,” she tells me, “Captain Cook who circumnavigated the area back in the 18th Century, had a sister ship captained by Tobias Furneaux, who didn’t actually set foot on the Islands but reported back to Cook that they were there. Cook was so impressed he named the set of Islands after Furneaux. I had a good rummage around in the museum to see if I could be related, but as yet have not found any evidence. It’s a great reason to return.” 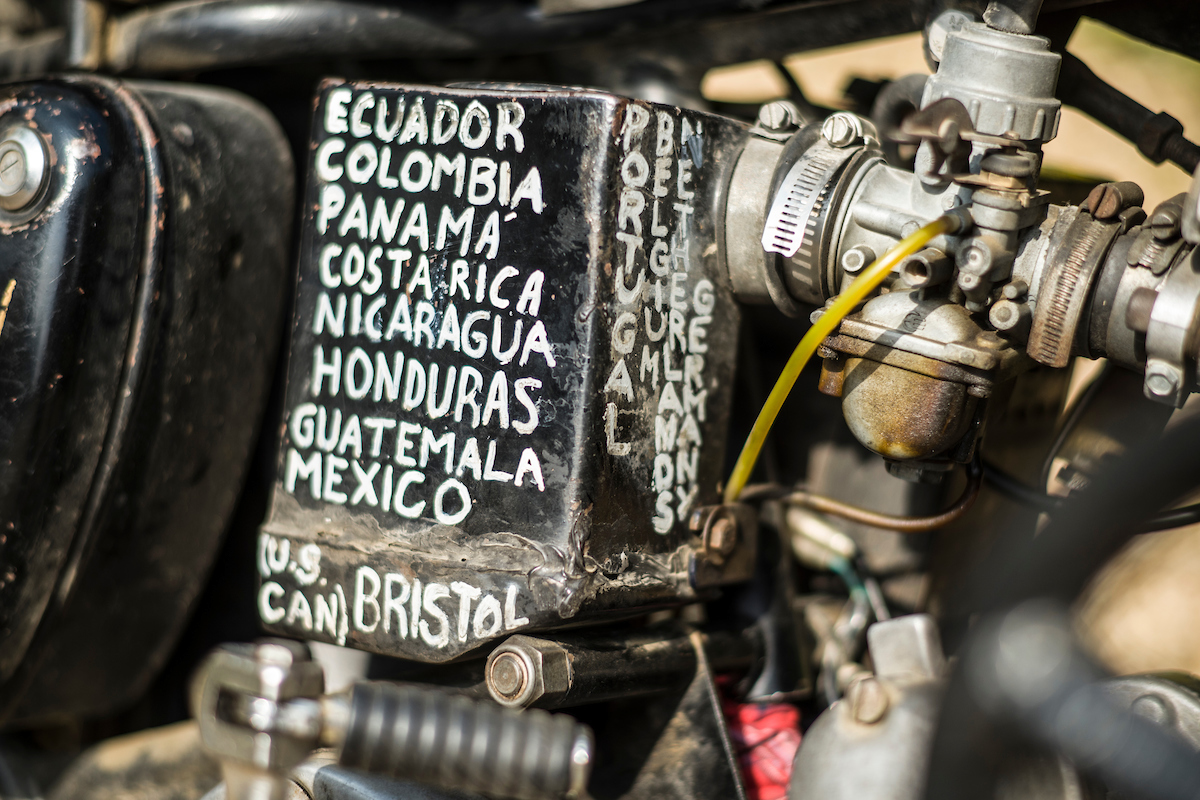 Jacqui tells me that her favourite thing to do whilst on the road is to simply look at the world around her, off the beaten track on lanes, seeing the flora and fauna, which made the decision to return to Australia to accompany her friend all the more easy to decide upon.

Keeping in mind that women have been travelling on their own for centuries I still needed to ask the most poignant question,

“How did you manage, did you feel safe – in today’s climate – as a woman?”

Immediately Jacqui responds, “Well, I didn’t have any concerns as a woman. Because I don’t think of myself as a woman. I am person riding a motorbike.” 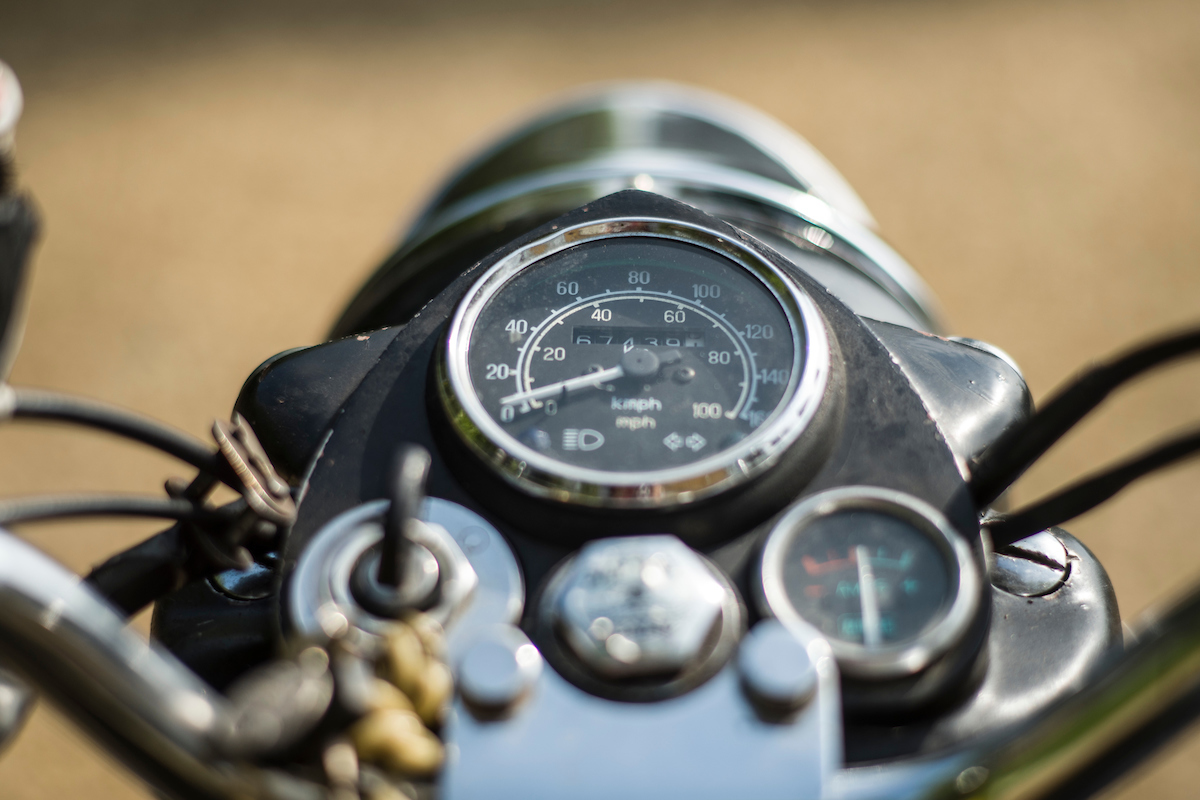 Whilst Jacqui goes into great detail about this in her book, ‘Hit the Road Jac’ where, she writes, “Where does fear come from? Is it inbred or do we learn it?” She tells me that her career as a nurse along with working with many different cultures in Stoke on Trent as a Health Visitor, she already began to see how to respect and appreciate the complexities of each community, that assisted her when she visited countries of similar and different cultures.

“In Papua New Guinee, we were told of horror stories of people hell bent on harming us, but I didn’t experience this at all, you keep yourself aware of your new and unknown surroundings, whatever perils awaited us we set off to meet our fate.”

“It is an interesting question though,” she begins, “in some places I raised an eyebrow – in Pakistan, in Pakistan you wouldn’t be a woman travelling on your own, let alone on your own on a motorbike.”

It is true, cultural changes occur all the time. It is apparent when you travel to a different culture. “Knowledge of the location and understanding and researching where you visit help” she concludes.

Smiling, Jacqui reminisces about another encounter, “I was at the side of the road on my own in India with spanners in my hand happily fixing the bike and a chap came by and took the spanners from me and offered to help, I said, oh thank you but I can do this myself” she explains.

And how is Jacqui with mechanics and self-sufficiency and looking after the bike?

“Well I had my first bike when I was in my twenties, a modern thing a Honda 50 or something, always took it to the garage to get serviced and ready for the season ahead, and I only really got on a bike because the summer was so hot my husband thought it would be a good idea to go for a ride on a bike to cool down, which I did and I was hooked on bikes, but never serviced them and although now I can understand what is wrong with it and fix minor roadside emergencies, I still take it to garage to get serviced, but at least now I know what is wrong and can get it working.”

Jacqui had not intended to buy the Enfield in 2000 (a fully manual bike without all the modern additions, it has drum brakes without a gear indicator for example, and one major element to start the bike one must kick start it, it has no electronic ignition), but after a backpacking holiday to Indonesia after she split up with her husband, she met a Dutchman who had an Enfield motorcycle and invited her to travel with him. So in India she bought the bike she rides today and they both set off.

“I have had this bike for nineteen years now, I know everything about it.”

I mention that I think it is huge, especially as Jacqui is small in frame how does she physically manage it?

“It is an Enfield not a Royal Enfield, in 2000 they didn’t have the rights to use the Royal part not that it being a Royal charter or anything but it is the same as a Royal Enfield, it’s 168kg along with the crash bars and luggage racks so a little heavier, but the weight ratio is low so it is easy to manage and I can touch the ground with my feet.

You learn with confidence and the day that I started travelling on my own when my Dutch friend had gone his own way, I realised that my life was now totally up to me, I dropped the bike at some point soon after and had to pick it up. It was then I realised that I could achieve anything, pushing the bike up with my legs and not my back, letting it lean to on the crash bars and luggage racks, I got the bike up and the revelation hit me, I can do anything.”

“Did it really take the dropping of the bike to realise that?” I asked Jacqui, “for when I dropped my motorbike I felt humiliated and thought I was the only one to do such a thing.”

“It was such an exciting moment,” she continues, “exciting as it was the moment when I realised I was truly self-sufficient and self-reliant, for the first time in my motherhood and career, it was a revelation to be responsible for a motorbike and myself.” 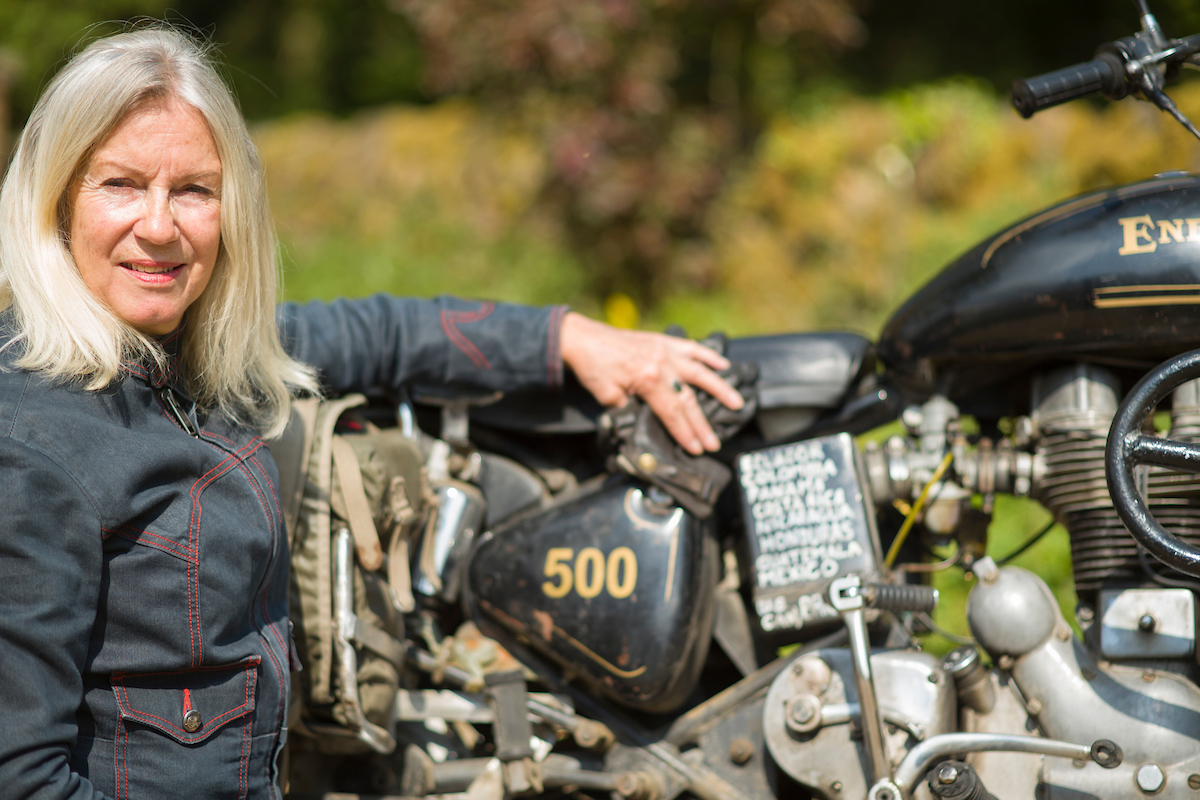 Speed, freedom and breeze, all those things with the Enfield is a joy, Jacqui tells me, it isn’t the speed it’s not a fast bike, but this ‘wayward woman’ isn’t about getting to places on a schedule and even today fitting back into a civilised society she finds a task. Staying with her daughter and getting to re-know her family after seven years apart shows how the lives of each have moved at such different paces and for different needs. Jacqui although loving her family very much didn’t feel drawn to coming back – and only did so for important occasions, her stories of travel kept daily in her journal were a far off interest to those living in the ‘real’ world. The language barriers that she found in Indonesia, I read from her book, are not too dissimilar to the cultural barriers she discovered on returning to the UK after such a period of time.

I leave Jacqui by asking what advice she would give to her 20 year old self.

“Do exactly what you did.” She relishes, “everything has led to this time. If I had changed anything I may not be this happy.”

On advice to someone who wants to travel on a motorcycle?

“Definitely do it. If it’s possible and it’s the right time. Do it and go for it. Don’t hesitate as there is nothing to be afraid of. I was braver, I think coming back and trying to settle down. Yes. Do it. Go and just wallow in it and you can always come back.”

‘Hit the Road Jac’ by Jacqui Furneaux is published by Shuvvy Press and is available for sale. Jacqui can be found on Instagram @jacqui.furneaux

Lara Platman is a keen motorcyclist, holds a motor racing license and is about to embark on a small adventure in her own 1964 Series2 Land Rover which she fully restored. Lara can be found at Photofeature