Delighted as always to see my work printed. First published in Heritage Insurance.

The 2023 Monte Carlo Rally is beginning to take shape. For the first time in the event’s history, five mountain passes in a row will create the longest special stage. Col de ’LOrme, Col de L’Albie, Col de Braus, Col Saint-Jean and Col de Castillon will provide twists and turns for the drivers. It is an event I truly wish I was attending, and a rally that was a firm favourite for the lady I would like to introduce you to. 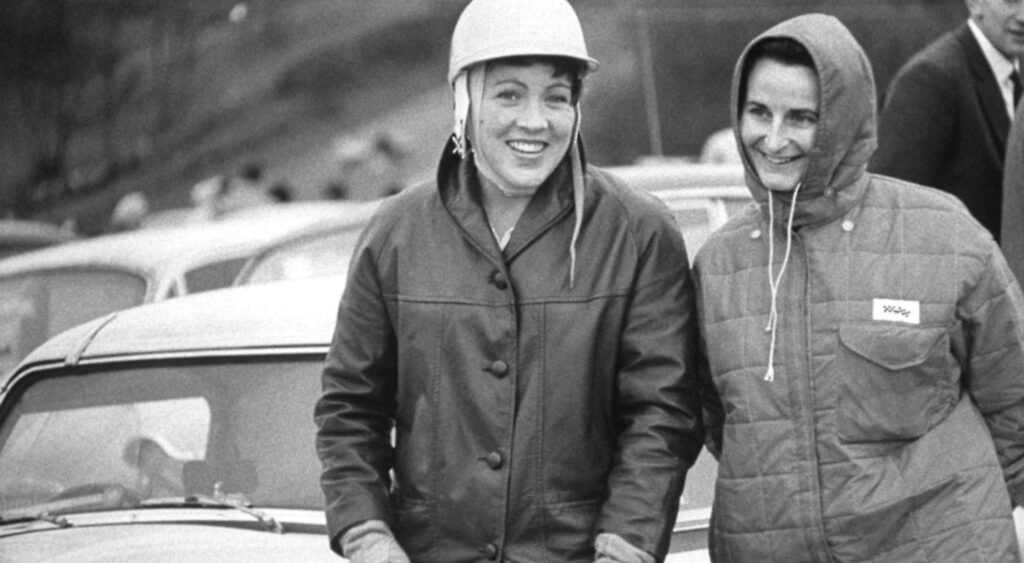 I thought that out of all the ladies I have written about so far in my Women in Motorsport series, Pat Moss is possibly the most suitable and notable. Although her brother rose to fame first, she made her own mark on the rallying world. She drove a number of recognisable cars over the years, amongst them Saab, Cortina, Capri and of course the Mini. I can hear you all now – ‘I know someone who had one of those’, or ‘I’d love one of those’ – Pat Moss certainly drove the cars that we recognise today as decent solid classics.

Now, buckle up and let me introduce you properly to Pat Moss-Carlsson.

Pat was born in Thames Ditton in 1934. Growing up, her passion was show jumping and she reached Olympic level at the age of eighteen; meanwhile her brother, Stirling, was making a name for himself in motorsport. They both enjoyed success in their respective sports; however, one day Ken Gregory (Stirling’s manager at the time) invited Pat to go on a motoring treasure hunt with him. She enjoyed it so much that she decided to have a go herself, and that is where her new-found passion was ignited. Soon she was regularly competing in rallies in her Morris Minor Convertible. At this time, show jumping was still her main career, so any rallies that Pat entered had to fit in around her work. She used the show jumping prize money to buy a Triumph TR2 in 1954 with a view to taking rallying more seriously.

Pat began rallying in her Triumph and asked Pat Richardson, the Triumph Competitions Manager, if they would cover her expenses, enabling her to enter the 1955 RAC Rally. Richardson said they would only offer up a car, without any budget, which allowed Marcus Chambers of MG to step in and offer a brand-new MG TF 1500 with expenses. Pat entered with Ann Riley (Elsie Wisdom’s daughter). Triumph lost out as Pat and Ann became really rather good at rallying, and they were soon known as Mossie and Wizz.

Both of Ann’s parents were racing drivers so it was no wonder that Ann would follow suit eventually.  When she wasn’t rallying, she worked as an office clerk. Her manager at the time discovered her love of rallying when he saw a photo in Motorsport Magazine of both Pat and Ann having won a rally. The problem, however, was that Ann had pulled a week-long ‘sicky’ to navigate for Moss. 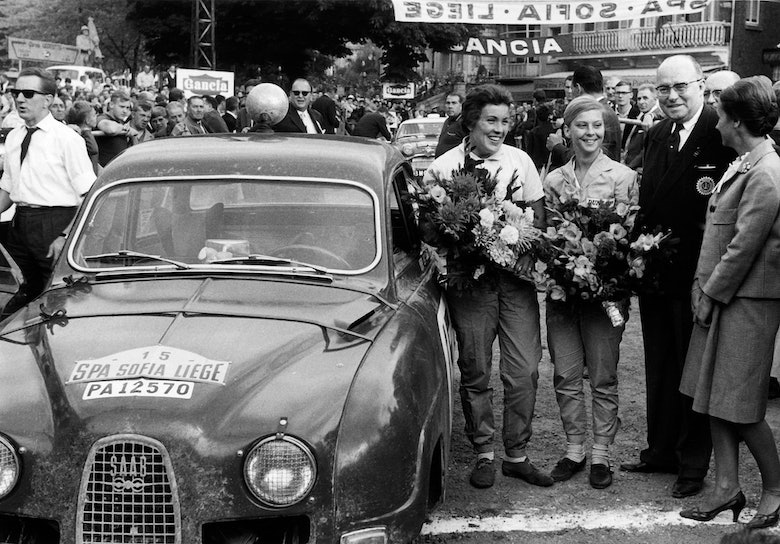 Her love of rallying came as quite a surprise as Ann suffered greatly from car sickness; she would spend many a road with her head out of the car:

Ann was one of the first co-drivers to be paid for her navigational skills and soon after, she swapped her desk job for a life in the fast lane, despite her car sickness issues.

The 1955 RAC Rally was Pat’s first works drive in the MG TF. It was a rally laden with ice and snow, where she settled for third in the ladies’ class. Other drives with the British Motor Company allowed Pat to create a name for herself. These included the Continental Tulip Rally in 1955 in an MG Magnette, followed by an Austin 90 for the 1956 Monte Carlo Rally where she finished 87th following brake failures and accidents. However, in an MGA for the RAC Rally in the same year, she finished on the podium for the ladies’ class. 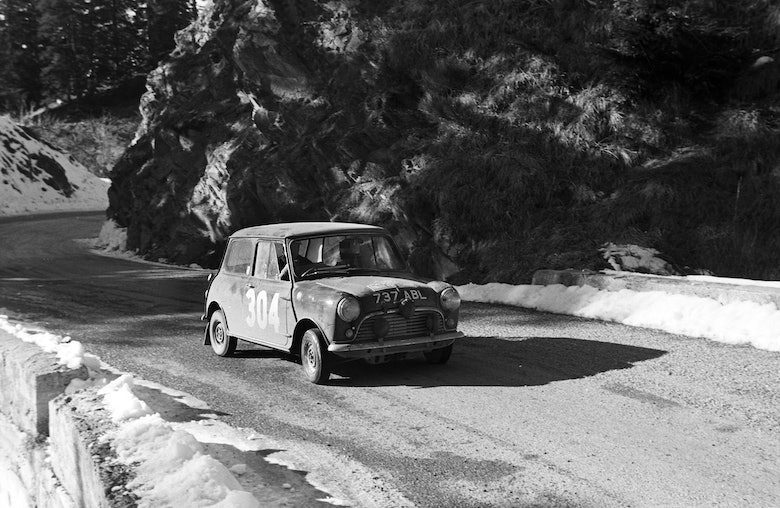 Following on from the MGA, she drove a Riley, then another Morris Minor 1000 in the Tulip Rally and the Liege-Rome-Liege in 1957. She finished in in 23rd place and then went on to win the ladies class and come fourth overall in the 1958 RAC Rally. It was in 1958, driving an MGA again, where she met her future husband Erik Carlsson on the Rally to the Midnight Sun in Sweden.

For the 1958 Liege Rally, Pat drove a Healey 100 taking 4th place and winning the manufacturers award. She gained impressive points that would guarantee her the Ladies European Champion title. It was the first time a woman had come within the top ten of this rally, and Pat Moss was now as well-known as her famous brother.

The 1959 Monte Carlo Rally she came 10th overall in an Austin 40. In the Sestriere rally she drove a Riley 1.5 litre, and then in the German Rally she drove a Healey 3000 where she tied in 1st place with Erik Carlsson in his Saab. She was in a Healey 3000 once again for the Geneva and Tulip rallies in 1960, taking 2nd on the Coup des Alpes and her first outright win on the Liege Rally. 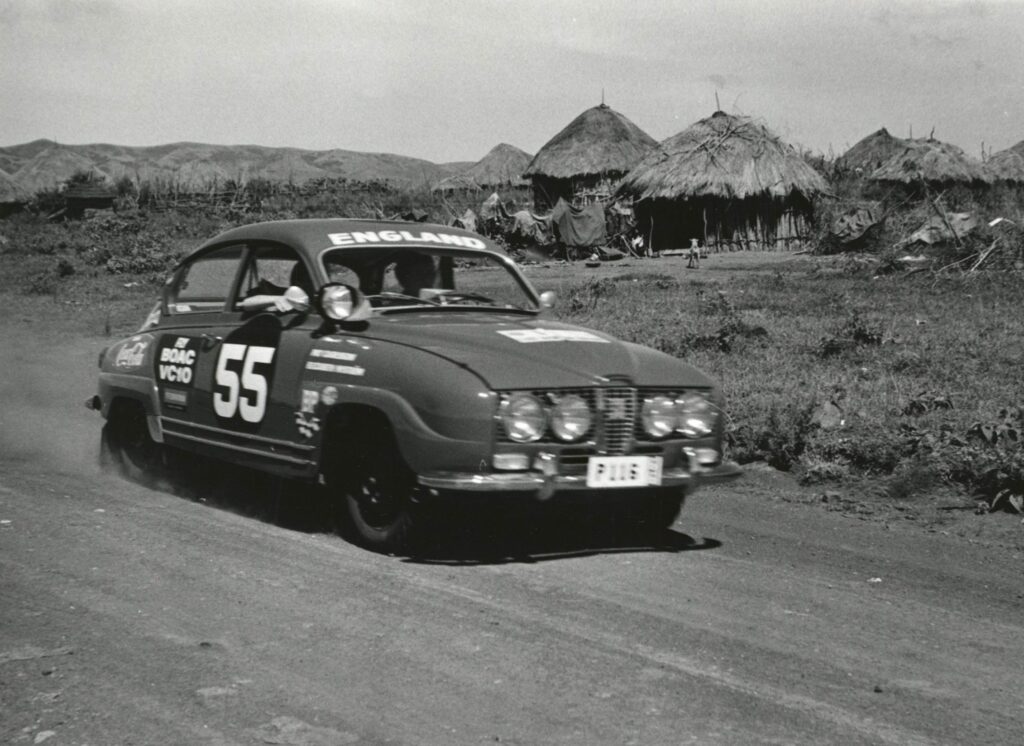 In 1961 Pat bought her own Saab 96 on the advice of Erik. She took the car to the difficult East Africa Rally and finished 3rd. Later that year she won the Tulip and German Rallies in a Mini Cooper, and in the Healey, she came 2nd in Poland and finished 3rd in the Coupe de Alpes and RAC Rallies. Moss was now considered to be one of the UK’s top rally drivers and she was a woman.

Ford offered her a drive in the works Cortina in 1963, however she only managed 6th place in the Acropolis Rally. Pat and Erik married that year and whilst Ford had tried to sign Erik, he was fixed with Saab. Moss decided to accompany him, and left Ford.

At this point in our story, I have almost lost count of how many cars Pat Moss   has driven, but I added up the total and it comes to fourteen different models, with some outright wins but mostly with a podium finish. the Moss – Wisdom and then the Moss – Carlsson team were a great force to reckoned with.

In 1964 the Saab was getting old, but the Moss – Carlsson team finished and always within the top 10. The new Saab 96 V4 in 1967 was a heavier and more robust machine and with it, Moss came 3rd in the Czech rally. She then went to Lancia and drove the Fulvia Coupe in 1968 finishing 14th in the Monte Carlo and 2nd in the San Remo, before winning the Sestriere Rally outright. In 1969 she took 6th place in the Monte Carlo, driving a Fulvia. She then raced the Targa Florio before giving birth to her daughter Suzie, at which point her rallying career slowed somewhat.

Moss drove a few races in the early 1970’s, including finishing 10th in the 1972 Monte Carlo rally in an Alpine A110, and the RAC rally with the Toyota team in 1974 in a Celica 2000GT. And then she fully retired and went back to horses, her first love.

Pat Moss-Carlsson might not have had an overall championship to her name, but she was crowned European Ladies’ Rally Champion five times. Like many of the women in motorsport before her, Pat Moss paved the way for the future generation. Mossie and Wizz drove over twenty rallies between 1958-62, during which time the pair achieved eleven victories. 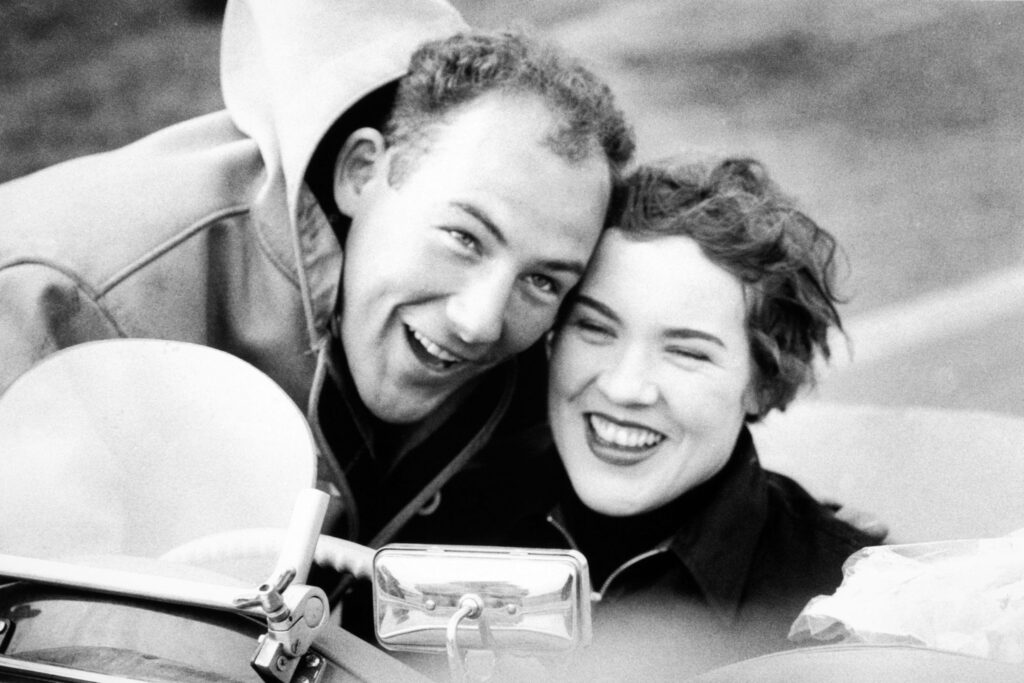 As we think about the upcoming winter season, women have driven the Monte Carlo for almost 100 years. Mrs Versigny drove a Talbot in 1928 and came 1st in Coupe de Dams and 3rd overall. Mrs Dinsdale in her 3-litre Vauxhall started at London Victoria to drive up to John O’ Groats before the departure point down towards Monte, she finished 48th overall in 1930. Joan Richmond in 1932 finishing 17th overall – where Mrs Vaughan and Mrs Walsh won the coupe de Dams in their Triumph. In 1933, Mrs Gripper and Mrs Marshal drove their Hillman to a satisfying 27th and Mrs Maruese and Miss Lumberjack came 1st of the ladies in their Art Deco Peugeot 301. In 1934, Simone des Forest and Miss Hustinx came 17th. And of course, The Honourable Mrs Victor Bruce who won the Coupe de Dames in 1927 – my favourite of them all.

Sheila Van Dam and co-pilot Anne Hall won the Coupe de Dams in 1953; in 1954 they were members of the sunbeam winning team, and they started well in 1955, coming 11th overall; the best result that a British woman had achieved since 1932.

Ewy Rosquist (more commonly known as Baroness Von Korff) from Sweden, a Volvo works driver, won many rallies in the late 50’s. She was very quick indeed and Mercedes took her to their team. She won the Gran Premio de Argentina in a works Mercedes, later marrying the Mercedes competition manager Baron von Korff.

Michelle Mouton from France is the only woman to have won a world Rally Champion race, winning three in 1982 and finishing 2nd overall that season.

Louise Cooke from the UK was the first female driver to be awarded the 2011 Female British champion and the FIA Championship title for the FIA WRC Production Cup in 2012. Competing in the Monte Carlo Rally in a Mk6 Fiesta ST, she became the first ever female podium-finisher on a round of the Production World Rally Championship when she took 2ndplace. On her debut, she made it her goal to simply finish. Today we have Catie Munnings from the UK specialising in the new Electric Extreme rally.

Looking at all these lady drivers I needed a view from an experienced Monte Carlo Rally Driver. I asked Rauno Aaltonen (one of the Flying Finns of rallying) who he thought were the lady rally drivers of note:

“The British ladies were more active in the 50’s, there are many of them. However, the real speed rallying started in Finland in the mid 50’s and in UK and Central Europe only [after] 1961, when the trend went from navigational and average speed calculation events to real speed events like the Rallye Monte Carlo and the RAC in England. Earlier were just using maps and watches but called [them] rallies.” He tells me, “So in my opinion Pat and Ewy are the crème de la crème.”

Throughout her rallying career, Pat Moss-Carlsson had quietly entered and achieved such a success to complement that of her brother, showing that speed and stamina were in the genes. It didn’t matter once the helmet went on whether she was a man or a woman. She succeeded against the men and continued to pave the way for female rally drivers to this day. She published two books in her time rallying: The Art and Technique of Driving (1965) and The Story so Far (1967) Pat Moss-Carlsson died of cancer on 14ᵗʰ October 2008, aged 73 at home in Eaton Bray, Bedfordshire.

Next time I would like to introduce you to Anne Cecile Itier, who might add a shimmer of intrigue to our collection.