When I was asked to write about a woman from history, I immediately thought of Mildred Bruce who, regular readers to Frank magazine may have noticed I had mentioned her previously, but then I thought about all the other women, in one way or another have shaped the motoring industry as we know it today.

Firstly, Bertha Benz who, was the business partner and wife of automobile inventor Karl Benz. She was the first person on 5th August 1888 to drive an automobile over a long distance, rigorously field testing the patent Motorwagen, helping to develop brake pads and solve several practical issues during the 65 miles trip.

Then we have Camille du Ghast who came a magnificent 33rd out of 122 drivers in the Paris to Berlin 1901 race, in her 20horse powered Panhard Levesso car.  During the 1903 Paris-Madrid, Ghast was amongst the leaders of the race, came across a catastrophic accident of an overturned De Dietrich car, and got out and helped to clear the carnage. However, a year later entering the Berlin-Paris race she was excluded from the race on the grounds of ‘female excitability’. A true fighting spirit, Camille du Ghast certainly started the wheels turning for other women at the dawn of the century.

Elizabeth Junek who lived throughout the 20th century made the Targa Florio race in Sicily her thing. Along with her husband for the mechanic, Junek soon provided a sublime driving style with her Bugatti 35b. She was nicknamed ‘Queen of the steering wheel’ and I can begin to understand why, as Madam Junek was the first person to mark out the roads on the course with chalk allowing her to foresee where the corners and obstacles were, enabling her to drive smoothly and effectively and so much faster than her rivals who relied on memory alone. Her racing career ended abruptly when her husband was in a fatal accident during the German Grand Prix. Devastated she sold all of her Bugatti cars, but to this very day, the system of the Tulips Map for rally courses exists created by the glamorous trailblazer.

Dorothy Levitt, the world’s first female land speed record holder, carried a glass mirror on a stick to use for her lipstick and to see what was following her, requested from car designer Selwyn Edge, that he place a glass screen on the car, in front of her face so she didn’t have to catch so many flies in her gauze head scarf whilst driving along and another lady racer Kay Petre, demanded a convenient place for her gloves. The windshield, glove compartment and rear view mirrors are with thanks to these insightful women. 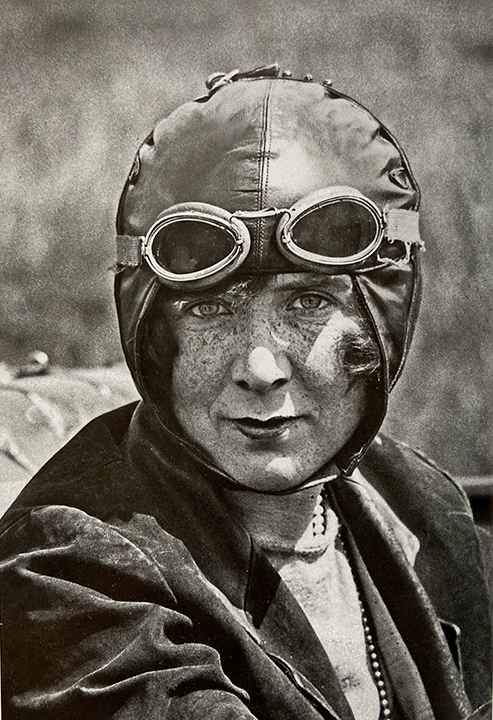 I am fascinated by this generation of women who simply didn’t know they couldn’t – who all knew they could! It wasn’t considered odd or exotic, it was just part of life, a time for speed, rallies, time trials and good solid racing around a circuit.  When Brooklands motor circuit opened in 1907, women raced there right from the start along with competing in road rallies and reliability trials. So forgive me as I return to Mrs Bruce who, for me encapsulates everything that a trailblazer is.

The Monte Carlo Rally began in 1911, but during the twenties with such interest from manufacturers and keen driving enthusiasts wanting to expose the quality and durability of their cars, the rules allowed competitors to select their own departures far and wide across Europe. Cities such as Warsaw, Gibraltar, Constantinople and John O’ Groats were all part of the new trend and by the 1920’s, the whole of Europe wanted to enter the Monte Carlo Rally, including a host of lady drivers.

Thick fog for fifty miles around Carlisle, mist on the Yorkshire Moors, heavy snow falling from London onwards… we find Mrs Bruce travelling a total of seventeen hundred miles for the Monte Carlo Rally in 1927 from John O’Groats. Mildred took it upon herself after repeated requests to Selwyn Edge to take one of his AC cars and compete in the Rally.  Mildred arrived almost asleep at the wheel, along with co-pilot husband Victor and the motoring editor of the Daily Sketch, Robert Bare, in Monte Carlo after 70 hours of nonstop driving. Mrs Mildred Bruce was the first woman to win the Monte Carlo Rally in 1927.

Not surprising really when at the age of fifteen was caught for speeding on her brother’s motorbike and having a baby out of wedlock, this in the 1920’s, Mildred was not afraid to get on with her life no matter what. 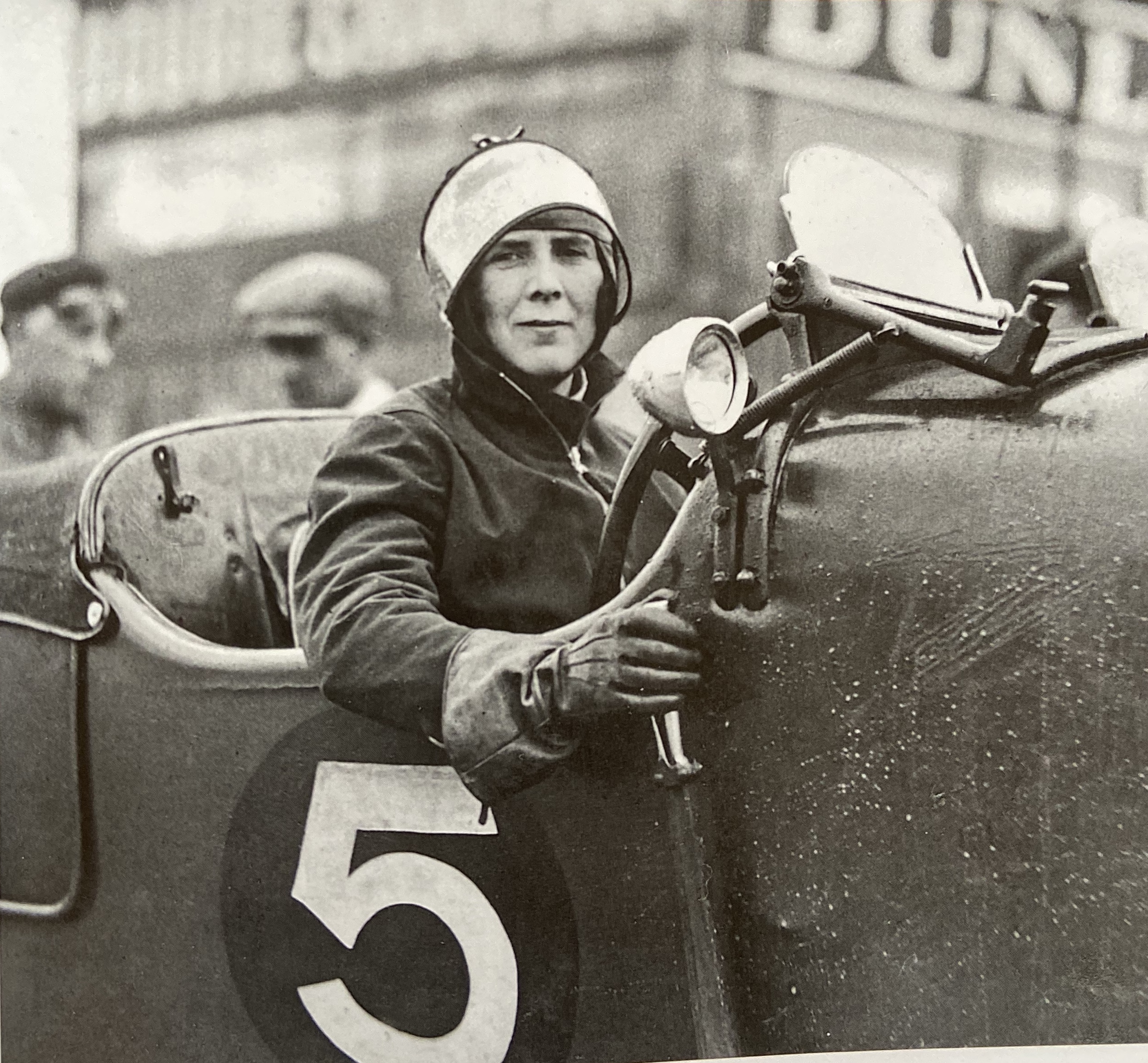 Following the Rally in 1927, Mildred continued her reliability trial of the AC around Africa (similar to how manufacturers test their cars around the Nurburgring today) and later that same year, went again in the AC car to travel 200 miles north of the Arctic Circle, a first for any motor vehicle of that date.  Following this success, her determination to break more records thrived, with an attempt to drive for 10 days and 10 nights at the Montlhery circuit with her husband. That record broken, she looked to another motoring exploit and tested the Bentley motor car, again at Montlhery just before Tim Birkin and Earle Howe would be utilising the very same car at Le Mans 24 hour race the very next month. So a 24hour endurance trial began in this extremely heavy 4 and a half litre engine car.

With a steady 107mph Mildred completed the laps and the time rolled in. During a pit stop Mildred stopped for a well needed gasp of water to perk her up only to find the bottle labelled water was indeed petrol, and with a big thump on the back Mildred certainly perked up and continued out onto the track. Once again she broke the record covering 2164 miles at an average speed of 89.7 miles per hour. Her reliability trial gained her British Petroleum as a sponsor who didn’t charge her a penny for fuel, instead they advertised their petrol had “kept not only the Bentley going but the driver too!”

Full of life Mildred tried many endeavours from speed boat racing along with joining the flying circus as a wing walker. With sponsorship money in her pocket from her endurance trials, one day, whilst walking down Burlington Gardens bought a fold up Blackburn Bluebird and with only 26 hours of flying lessons to her belt in 1930 flew solo around the world whilst becoming the first woman to fly single-handed to Japan.

Mildred recorded her diary whilst in the air describing her every thoughts, worries and delights. Now available to hear on a vinyl record, her voice is exquisite, deep and precise. Occasionally folding up the plane for extended periods over the sea for instance, Mildred is one of the breed of women such as Amy Johnson and Amelia Earnhardt who took to the air breaking new records. On her return to Croydon in fact, Amy Johnson and Winifred Spooner were there to celebrate her arrival. 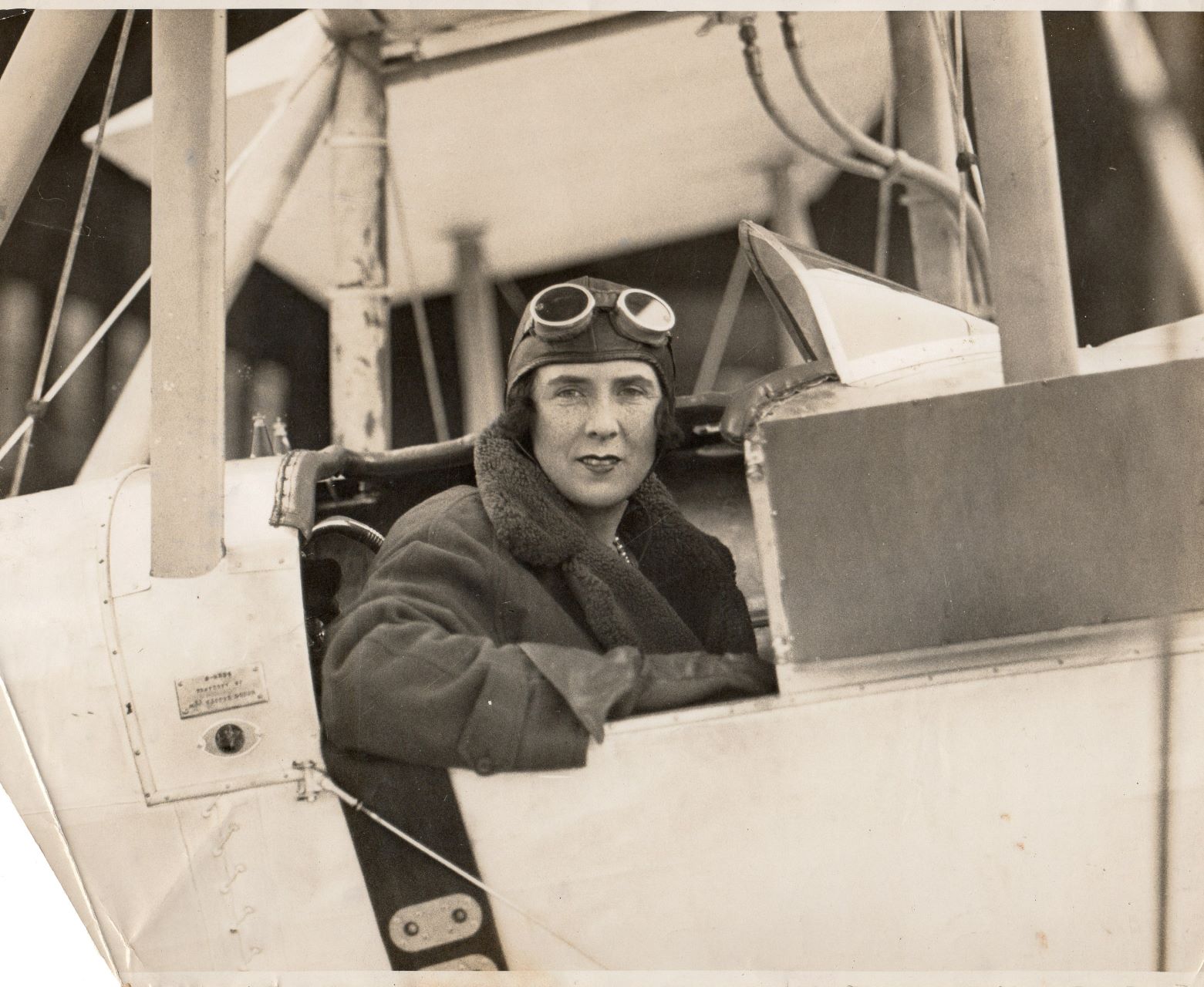 Confident in the air, Mildred started an air transport coups, servicing Croydon to Paris, and with passengers on board, she was the first British person to place an air hostess on the flights. Daphne the air hostess and Mildred would have a jolly decent time in the Paris hotel where they would often let each other know who had ‘gentleman company’ that evening, by placing a pair of shoes outside their room for ‘cleaning’, Mildred in her diaries describes this quite candidly.

As the world turned to the war, Bruce became part of the Air Ministry team who worked on aircraft to aircraft refuelling in the air, whilst her air transport soon to turned to war time demands by starting a factory to make fuselages and then after the war, her fuselage factory began to make coach bodywork.

Still very much a fast lady in later life, Mildred Bruce took a new Ford Capri at speed round Thruxton motor circuit in the mid 1970’s. To my sadness I never found out about the Honourable Mildred Bruce until after her death in 1990, she was 94 when she passed and I understand that when an electrician came to fix a light in her bedroom where he found Mrs Bruce in bed, seeing the bed displayed at an angle, he realised a leg had broken off. He fixed the bed with her still in it. 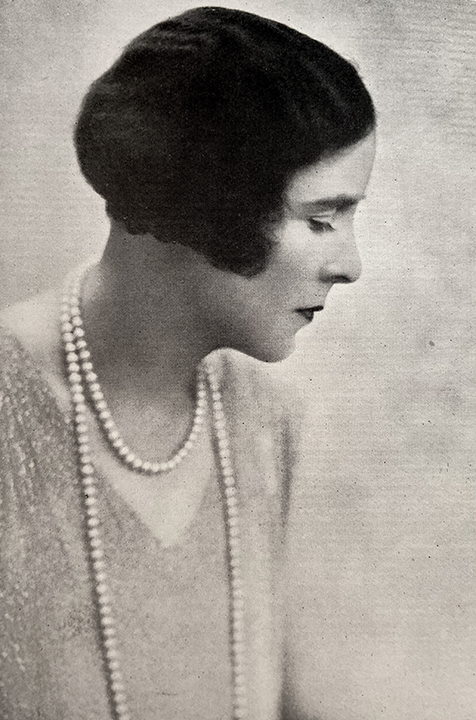 The current owner of the house keeps all the documentation she left behind, including the  recording of the air crossing, many medals and trophies along with her notes for her numerous articles, newspaper cuttings and diaries.

From glove compartments to air to air refuelling, the motoring industry has a host of women to be thankful for however, Mildred Bruce compels me to endeavour to achieve more than I could possibly imagine. I have written a radio drama about this remarkable lady and hope to have it aired this year. I think her story deserves to be heard by a new generation of young ladies.

If Mildred Bruce can do it, I can certainly have a go.

Lara Platman can be found on twitter at @photofeature