From the moment that the second car rolled off the production line, Henry Ford proclaimed, let’s go racing, well that’s how the saying goes at least.  More recently, car manufacturers that put their cars into race series said, ‘Race on Sunday sell on Monday’, and this is true to this very day. From Toyota using Hybrid technology in their endurance race cars, Audi and Porsche soon to follow, then Nissan with their electric cars, and finally the Formula E series with solely electric cars, enable the cars on our roads to be more ecologically friendly with fuel consumption and of course the electric motor.

I often forget the electric motor car was invented in 1830 with the first crude electric motor vehicle but it only took hold in the 1870’s when production began. And in 1898 Ferdinand Porsche, founder of the sports car company by the same name, developed an electric car called the P1. Ironic that in 2019, they launched their Taycan Electric vehicle.

Yet, it was Henry Ford’s mass-produced Model T that dealt a blow to the electric car. Introduced in 1908, the Model T made gasoline-powered cars widely available and affordable, the steam or electric engines which were more complicated to build, became obsolete.

Until today, where we are introduced to Amanda Stretton who is working closely with the Jaguar I-Pace team as their commentator and all round promotor.  I catch up with Amanda to find out how her passion for motor racing came about.

“When I started I thought this was my hobby and not in a million years did I think this would turn out to be a real job. I don’t think I have had a real job for years”.

What is your real job? Well, let’s get to that in a minute. When did you know you wanted to have a go at motor racing?

I was 13 and had a go at racing motorcross -motorbikes, but the only problem was it really hurt when you fell off and decided quite quickly that I wanted to race but not with such dangerous possibilities each time you fell off. Motorbikes weren’t for me.

My dad at that time started collecting cars as a hobby and soon started to get serious with the cars, wedding cars. I was at an auction with him when I was about 16/17 years of age and met Martin (my first husband), who said I’ll teach you how to race, went to the Nurburgring motor circuit and learnt.

Just 17 with a driving license and a race license, my dad had bought me an old 3 series BMW  a big heap of rubbish.. I did the Vintage Sports Car Club Pomeroy Trophy as my first race and spun 5 times… it was raining. I then started to race more classics and did quite well.  Martin and I went our separate ways and at that time Channel 4 were starting to televise Formula 3 for the first time – (when Jenson Button went from Formula Ford to Formula 3),   they wanted a female commentator who knew about racing. Having had no desire to get into TV, I had studied Art History and was planning to work at Christies, so a TV career wasn’t the plan, so anyway, I got that gig.

I think we can say the rest just follows, as Amanda went on to present a number of racing programs on TV.

I hate to say – for a girl – it made a good splash really, that I could race and try commentating.

Did you race as well as presenting?

Yes, someone was putting a team to race in British GT in a Viper, so I had a solid season in racing at last. After racing all sorts of different cars … and acquired a TVR Le Mans eligible GT car… and then ran that for a couple of years and tried to make a team with other female drivers, but trying to raise funds was near enough impossible, thinking naively that women drivers would get the sponsors.  But ended up racing at Sebring with a view to race at Le Mans. It turns out I was pregnant at Sebring with my second child.

Do you think your attitude to racing changed with the arrival of  children?

Yes, unquestionably, in that I still wanted to race, but when I considered dangerous racing –  if I found the gap with a driver I trusted on the track I would go for it, but there are always drivers who you haven’t raced before or race dirty. Depends if I trust them. I did remind myself I needed to bath my child at the end of a race so would need to trust the other drivers to be able to make that gap.

Amanda tells me about some of the races with people, with exquisite detail on the lines and results, with that she reminisces about such amazing races and some horrific results.

For whatever reason I was brought up to think there is absolutely nothing I can’t do, it’s never occurred to me that there are different genders in racing.

When I started knocking around in historic cars, racing at Le Mans 24 hours was on a bucket list – similar to me going to the moon.  I eventually after doing lots of different jobs within motorsport, with two children, managed to get a seat to race there. The team I was racing with had a team ready, but because the third driver who was the team, couldn’t make it and instead of finding another paid driver who they didn’t know, put me in the seat. After some speed and reliability tests, I ended up racing a Le Mans prototype car having never raced that car or at that circuit before.

So a prototype car is a car that is literally a prototype for what will become a road version of that make eventually, so to speak. A car that is specifically designed for racing. The top tier of Le Mans.

I felt I knew Le Mans as a broadcaster, but racing it is a different kettle all together. Biblical rain in an open top car. Engine failure, amongst other ‘events’ during our race.  We were the last fully petrol engine amongst the new prototypes racing that year. It was an experience.  Alas we lasted 12 hours, didn’t finish.

But that’s racing Amanda.  After a great detailed minute by minute description of the race, Amanda laughs,

If Le Mans could have been any worse, I would like to know how.

And you lived to tell the tail and you raced Le Mans 24hour.

After that I decided I was not going to race modern cars anymore and carried on racing historic racing and all the way through had been commentating at Goodwood so carried on racing historic and met a racing partner who I share a car with which allows me to go have a lovely time racing with a glass of champagne afterwards and get home to see my children. And that for me is perfect. Because of course now, I am working Formula E. 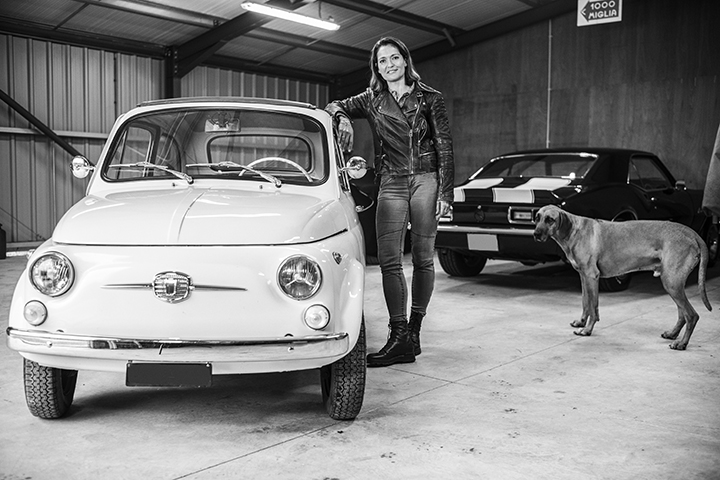 Ah, here we are, your real job, tell me about this.

I am in a sort of weird place, with children – my young people and have all this experience and knowledge of racing, and met various people at the Jaguar board and they wanted to get into Formula E.  They needed somebody to front up the public side of the operation, to speak to all the markets when we travel the world and explain what is actually happening and the relevance to road cars and also frankly to explain what is going on out on the track as well as the racing strategies which are very different to how a normal race is operated. They needed someone who understands racing and also a presenter – whilst being totally in love with the technology side of things.

This is brilliant because and although you say that motorsport is the development of the road car, this sort of undermines the immense design and engineering that goes into a race car and many a road car program doesn’t come from racing however, Formula E does come from racing and it pushes the boundaries, at a rate and a quantity that is unprecedented,

Not with just cars, but lampposts and petrol stations and the whole infrastructure surrounding it to facilitate that vehicle.

Yes, so I have these young people in my life and am aware that they will be driving these vehicles for the majority of their lives unlike an internal combustion engine and I look at this technology and think it is amazing.

It has been running now for a few seasons, the first season or so was a bit bumpy as everyone was running the same thing. But now it has started to really take hold as the manufacturers have come in and started to develop their own power trains – that’s where we really need to be, suddenly season three we get Audi, Toyota, BMW, Porsche and Jaguar decided they wanted to be involved. They already had the I-Pace road car in development.

Jaguar now run the I-Pace Series as a support race.

Initially there were so many people who got grumpy that these cars were not real race cars – but you know, if you are a racer you’ll race anything, I would race wheel barrows if I had the chance.

I was thinking about Tesla, that’s the most famous battery car?

When you think of Tesla, the funny thing is that none of the technology is their own it has all been brought in from outside source. Now with the Formula E series, and specifically the Jaguar I-Pace Series, each manufacturer can make their own internal electric vehicle, coming up with better batteries and software systems, they are improving the road vehicle with racing, saving costs for the consumer.

I would like to stay with Formula E as it grows, but also I have learnt how interesting I find where we are going with technology with autonomous vehicles and vehicle ownership, that actual model of personal mobility within our society what it is going to look like in the near future.

Are we going to be flying?

Will we see that whilst we are alive?