Mildred Bruce: A passion for speed

I am so excited to share the story of a remarkable lady: the Honourable Mrs Victor Bruce. Mildred epitomises everything about the trailblazer of the period of the Bright Young Things in the Roaring Twenties.

Mildred Bruce, also known as Mary Petre, was born to the youngest brother of Lord Petre of Ingatestone Hall and second cousin to Henry Petre, who later married Kay Defries (a woman I have previously mentioned in this series). Mildred’s father was Lawrence Petre, the sixth son of the honourable Arthur Charles August and Lady Katherine Petre. Following the early death of his father, Lawrence attended a Catholic boarding school, then spent his bachelorhood roaming around Thorndon Hall – a magnificent Palladian mansion near Brentwood – with his uncle William Joseph Petre, the 13th Baron (who was also monsignor of the Vatican) and their fifteen pointer dogs.

The quintessential ‘Easy Virtue’ movie kicks in here, when Lawrence married Jennie Williams, an extroverted American actress. He visited her on the London stage and gifted her with a dazzling diamond necklace and peonies. Amongst the many exquisite presents were Parisian Bonnets, followed by an engagement ring. Once married, the happy couple moved back to the family seat of Coptfold Hall in Essex (one of England’s lost country houses, now demolished) and Lawrence became a keen meteorologist.

This early beginning sets the scene for Mildred and her elder brother Louis as having a rather aristocratic yet eccentric upbringing. As a girl, Mildred was gifted ponies as suggested by her mother although, despite being attached to a cart which was pulled at haste and ditched quite regularly, Mildred was always interested in her cousin Henry’s exploits. Mildred took a Matchless motorcycle, belonging to her brother – which she painted red to match her ribbons – and got caught speeding at the age of 15. Luckily, she was not formally charged as the officers were unable to determine her speed. So begins my fascination with this relentlessly determined trailblazer.

Mildred and her mother soon moved beside the Shoreham Aerodrome, whereupon Mildred had an affair with a flying officer and, in 1920, gave birth out of wedlock. Mildred relocated to Sussex and, despite now being a single mother, her passion for flying and speed only grew.

In 1907, Mr and Mrs Locke King opened Brooklands as a racing circuit, and it was Selwyn F. Edge (once the owner of the De Dion Bouton motor car) who created the record attempt for a 24-hour trial as the first event at the circuit. In 1924, Mildred broke this record, and it was to become the beginning of a longstanding business relationship between Selwyn and Mildred and, of course, her determination to break records. 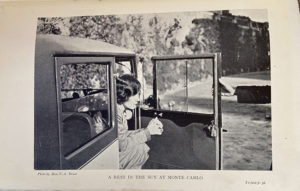 The Monte Carlo Rally began in 1911. As both manufacturers and keen driving enthusiasts alike wanted to demonstrate the quality and durability of their cars, the rules allowed competitors to select their own departures far and wide across Europe. Locations such as Warsaw, Gibraltar, Constantinople and John O’ Groats were all part of the new trend and by the 1920s, the whole of Europe wanted to enter the Monte Carlo Rally, including a host of lady drivers.

“Thick fog for fifty miles around Carlisle, mist on the Yorkshire Moors, heavy snow falling from London onwards…” These were words from the diary written by Mildred, who travelled a total of seventeen hundred miles for the Monte Carlo Rally in 1927, all the way from John O’Groats. Mildred, accompanied by her husband Victor whom she had agreed to marry if he were to win the Monte Carlo Rally the previous year (he did, and they married at the British Consulate in Menton), and the motoring editor of the Daily Sketch Robert Bare who reported daily for his column.

After repeated requests to Selwyn Edge, Mildred acquired one of his AC cars and competed in the Rally. She arrived almost asleep at the wheel in Monte Carlo after 70 hours of non-stop driving. Now also known as the Hon. Mrs Victor Bruce, Mildred was the first woman to win the Monte Carlo Rally, in 1927.

Following the 1927 Rally, Mildred continued her reliability trial of the AC around Africa and later that same year, went again in the AC car to travel 200 miles north of the Arctic Circle, a first for any motor vehicle at that date. Following this success, her determination to break more records thrived, with an attempt to drive for 10 days and 10 nights at the Montlhery circuit with her husband. After breaking the record, she looked to another motoring exploit and tested the Bentley motor car, again at Montlhery. This was just before Tim Birkin and Earle Howe would win the Le Mans 24 hour race the following month in the very same car. So, a 24-hour endurance trial began in this extremely heavy 4.5 litre engine car.

With a steady 107mph, Mildred completed the laps and the time rolled in. During a pit stop Mildred stopped for a gulp of water to perk her up, only to find the bottle labelled ‘water’ was, in fact, petrol. After a big thump on the back Mildred certainly perked up and continued out onto the track. Once again, she broke the record, covering 2164 miles at an average speed of 89.7 miles per hour. Her reliability trial gained her British Petroleum as a sponsor who didn’t charge her a penny for fuel. Instead, they advertised their petrol as having “kept not only the Bentley going but the driver too!”

Full of life, Mildred undertook many speed-related endeavours, from speed boat racing to joining the flying circus as a wing walker.
“When passing through Hendon I had stopped to watch the speed boats racing on the Welsh Harp at Edgware, and my imagination was captured by the possibility of setting a record on water. I decided to buy an outboard.”

Mildred set a record for the fastest time crossing the English Channel, clocking 1 hour and 47 minutes in her ‘Mosquito’. She decided that, as she held the Land Speed Record for driving solo for 24 hours, she would try to break the record for longest distance ever covered on the water in 24 hours. With the Cunard Company providing her with the ‘Berengaria’, which already held the Blue Riband for the Atlantic 24-hour record of 691 nautical miles, she set her trial in the Solent, which of course she broke (just) with 694 nautical miles. 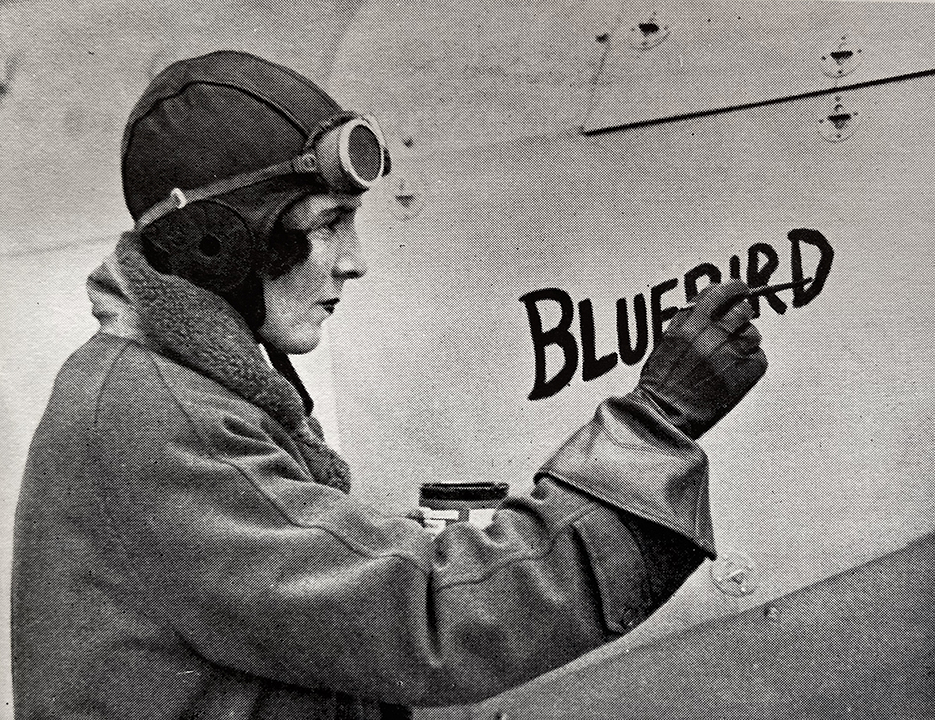 With sponsorship money in her pocket from her endurance trials on land and water, one day, whilst walking down Burlington Gardens, Mildred bought a fold-up Blackburn Bluebird. Despite having only 26 hours of flying lessons to her name, in 1930 Mildred flew solo around the world and became the first woman to fly single-handed to Japan.

Mildred recorded her diary whilst in the air, describing her every thought, worry and delight. Now available to hear on a vinyl record, her voice is exquisite, deep and precise. Occasionally folding up the plane for extended periods over the sea for instance, Mildred is in the same league as women such as Amy Johnson and Amelia Earnhardt who took to the air, breaking new records. On her return to Croydon in fact, Amy Johnson and Winifred Spooner were there to celebrate her arrival.

Confident in the air, Mildred started an air transport corps, servicing Croydon to Paris, and with passengers on board, she was the first British person to place an air hostess on the flights. Daphne Kearly the air hostess and Mildred would have a jolly decent time in the Paris hotel, where they would often let each other know who had ‘gentleman company’ that evening, by placing a pair of shoes outside their room for ‘cleaning’; Mildred describes this quite candidly in her diaries.

As the Second World War raged, Mildred’s transport soon to turned to war time demands; she helped by making governmental flights, and even started a factory to make fuselages. Along with her husband Victor, Mildred became part of the Air Ministry team based at Portsmouth, who worked on aircraft-to-aircraft refuelling in the air, taking care to bring along her trusty voice recording device, which was the size of two shoeboxes.

After the war, the fuselage factory began to make coach bodywork for town buses, and Victor opened an experimental workshop at Feltham. Silent Transport Ltd., of Woking, was ahead of its time, converting popular cars and commercial vehicles to electric propulsion. The idea was to defeat the ban on the “basic” petrol ration. Victor used an Opel saloon, which had a range of 40 miles, at a 30-m.p.h. cruising speed, with the conversion costing about £350.

Still very much a fast lady in later life, Mildred took a new Ford Capri at speed round Thruxton motor circuit in the mid-1970s. To my sadness, I never found out about the Honourable Mildred Bruce until after her death in 1990. She was 94 years old when she passed and I understand that, when an electrician came to fix a light in her bedroom as Mildred lay in bed reading, he saw one of the bed legs had broken and fixed the bed with her still in it.

From breaking speed records on land and sea, to air-to-air refuelling, and honourable war-time efforts, we have a lot to thank Mildred Bruce for. I have written a radio drama about this remarkable lady and hope to have it aired this year. I think her astonishing story deserves to be heard by a wider audience.

Next time I look at the incredible life of Fay Taylour, a champion speedway rider from Ireland.

Lara Platman can be found on twitter at @photofeature