They say the best ideas are discovered over a drink – or two and whilst at the Guild of Motoring Writers annual awards dinner last December, on my table were the Honda team who, decided that it would be a superb idea to get me on a motorbike and out on the roads. Having already ridden a twist and go Vespa in London years ago holding just a CBT (Certificate of basic training which lasts for just two years) I thought this was a jolly good idea indeed.
My new adventure would be with a geared motorbike firstly with a CB125F then after passing the CBT I would move on to an NC750S, which although this does sound fast it actually is sort of equivalent to a 500cc. So after indeed passing the CBT, with well, with ease, and passing the theory exam, with, well with ease, I moved onto the NC750S, which at first was daunting, it seemed so much bigger and how would it move off from parking? I suppose I find an aeroplane taking off daunting and never wish to sit at the back in case I get dragged along the floor without the pilot noticing, alas, it did move off with me on it and my car park practice proved quite a breeze. I did perhaps stop without my rear brake once or twice and the bike did start to tipple however, on the whole, my figures of eight were quite a delight once I had to learnt to lean to the right – one of those aeroplane dilemmas again – surely I would just tip like a cow?
Whilst gravity still plays havoc in my mind, my Mod One exam in the large car park got passed, well I passed it, and the only thing to do next would be my Mod Two: the riding on the roads and put all this bike control to test with the highway code and living things… and fast things moving around you.

All was going well until the 10 minutes of self-direction on the road was announced. “Follow signs to Farnborough” was what stumped me. From there all manner of mistakes got made – in one junction. A darned roundabout. Three mistakes on one action. Instant fail. Probably for the best we all say, the examiner probably saved my life – and so I am currently yet to pass my Mod Two.

Meanwhile, those friendly faces at Honda invited me to the Isle of Man TT, to experience what I can only describe as utterly extraordinary. Racers riding along roads (closed to the public of course) at speeds of 170 mph, where normally it would be 50. ( only realised the actual craziness after taking a Honda CBR125R out on these very same roads, for part of my IOMTT experience was to actually ride on the same course roads as Michael Dunlop, Guy Martin (our Honda racing chap) and Peter Hickman the current names I can remember (you have to realise that I am all about the car, and motorcycle racing names to me go whoosh over my head, however amazing they are)… however let me explain one thing to you, these riders ARE amazing. Their utter determination to beat their own lap records is one thing, but they also have an intrinsic need to be faster for as many times as their heroes, and fellow competitors. They after all are the true epitome of a thoroughbred racer, knowing the dangers that may prevail (and with three mortalities on the Isle during the TT this year the dangers and riders are certainly in everyone’s hearts).

Whilst waiting for the diagonal rain to be less articulate, and the sea winds to be less hurricanesque – for my ride out with my dedicated instructor to take me over some quiet routes on the Island, Honda racer John McGuinness wondered into our hotel with his leg all done up like a Christmas tree, (he had been out on a road race somewhere else at probably 170mph and discovered that a mixture of a false neutral on the bike and road surface would make for a seemingly horrific crash) and sat beside our party. My instant mechanical intrigue was to whether John’s injured leg was complete with AF, BSF or Witworth nuts and bolts. His reply to me was simply, “No they’re Metric”. From then, with an ice-breaker of industrial proportions, I began to discover who John McGuinness really was, (my crash course (sorry) on ITV4 for the IOMTT the previous week had mentioned him, Joey Dunlop, Mike Hailwood along with the records broken and the speeds obtained, but I think I had missed out on the in depth interviews with John McGuinness). 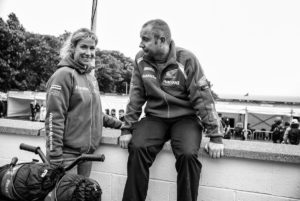 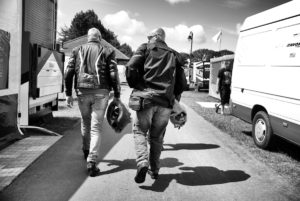 Not wanting to make him relive any of his accident, I was interested to know what was what with his leg. John alas was proud in explaining how one leg was now shorter than the other and next week he would start the process of, with a new plate in, stretching the ligaments through the turning of all the nuts holding his leg together. He was totally pragmatic about the situation and so happy to be amongst his friends along with wanting to sell his book to his fans, the TT is all that he wanted to be about. I began to see the addiction of this desire for speed, the need to be on the bike and despite this accident wanted to get well again and get back on. 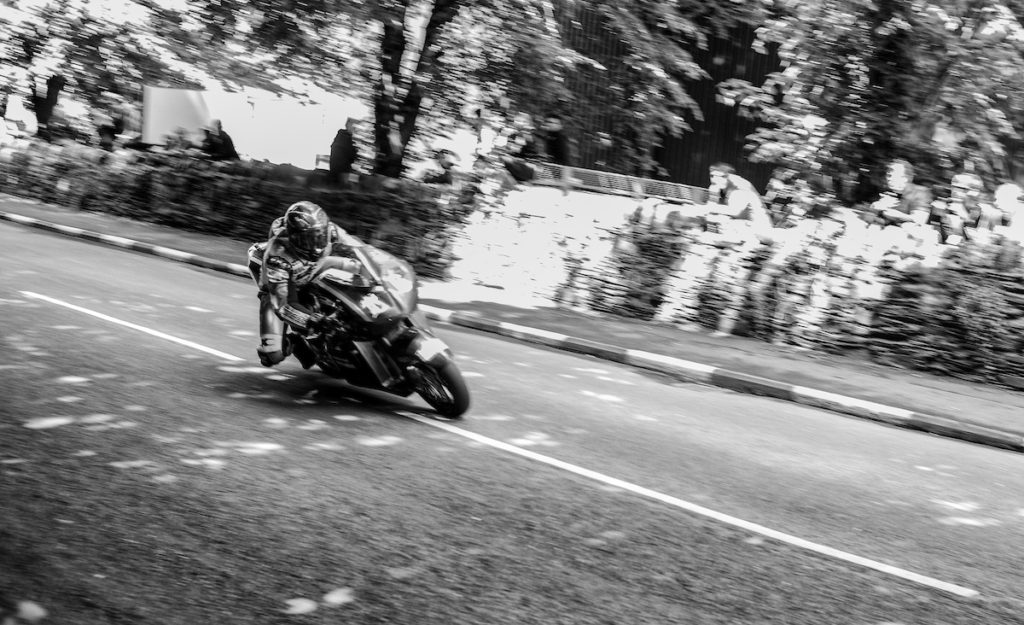 The winds dropped and the rain a palatable spit, Steve my instructor and I went out for a ride for me to discover that everyone, and I really mean everyone, on the roads of the Isle of Man, were super polite to me and my little mean 125 machine. As it was the first time out for me on a bike in a few weeks my confidence had dropped somewhat, especially with a hill to get out of the underground car park with this Honda CBR125R (previously full of Honda Africa Twins, for the more adventurous in our party), I had the aeroplane conflict in my brain and Steve, I reckon was beginning to think that driving Miss Daisy would not be happening today. It did and I became accustomed to the generous roads that the island provided for me. Our attempt to go over the mountains halted when the mist set across our visors, but we had in fact taken part of the TT course.
“We were on the course” Steve said to me.
“Were we? I really didn’t’ know, we were on 30, 40 and 50mph roads with villages and brick walls though” I replied with a puzzled, really puzzled face.
“…did you not see the lamp posts in Puffa jackets?” Steve replied. 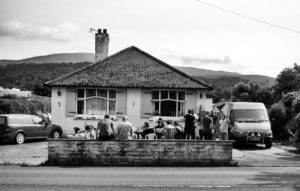 I had not, I was really trying to imagine how anyone could go fast around these roads let alone on their knees at places. Riding back, Steve pointed to me the abundance of lined lampposts in the streets. We had ridden on a lot of the southern part of the circuit. Not quite making a 17.3 minute lap or at 134 mph on average.
My confidence on the tarmac had improved tremendously and Steve commented how I was really enjoying it. The people behind me (a lot of them) were really kind to me and hats off to Honda for knowing that this bike riding experience on the island would leave me wanting more. 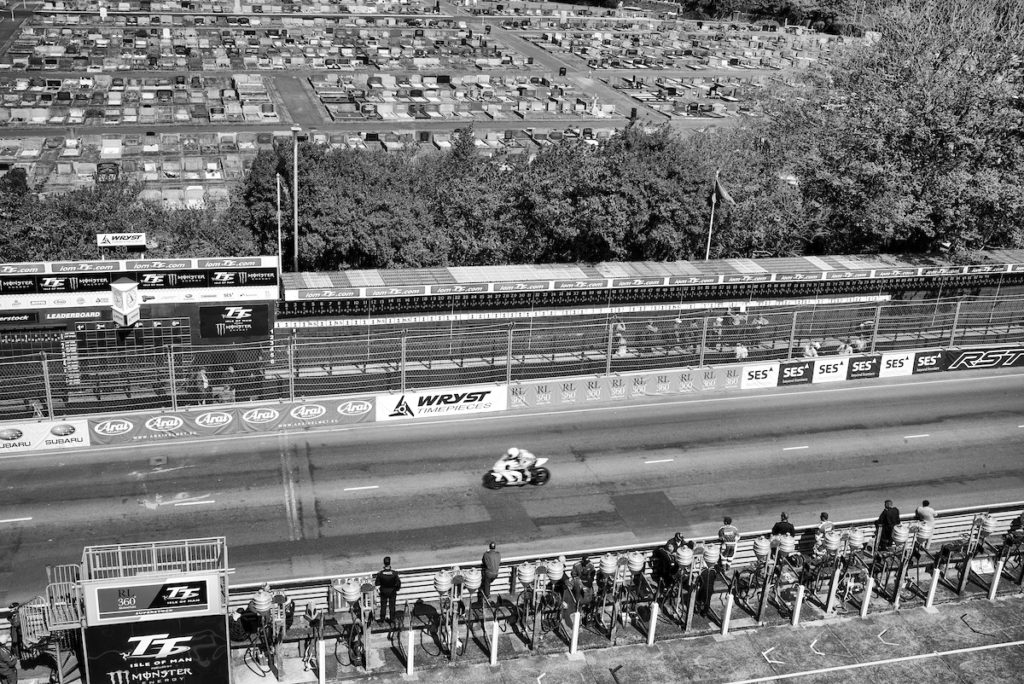 I return now to the morning of when my Honda CBR125R arrives for a few more days of practice before my Mod Two exam next week. I am sitting here by the front door like a dog awaiting his owner. The thought of getting my ill fitted Spidi gloves, superbly fitted Shark helmet and inadequately protected armoured Gortex kit on is much to be desired. I need to up my game on my look and protection, but mainly, pass that exam.
To be continued…