It has been a while since I have been on a date and wondered what ingenious ways I could conjure up to acquire one. I remembered when I was riding a twist and go Vespa Scooter in London years ago I would quite easily meet people at traffic lights, so with this in mind I set to gaining my full motorbike licence and decided this might be a jolly good idea indeed – not to mention travelling by motorbike has a plethora of benefits which I will go into more detail in a minute.

My new adventure would be with the Honda School of Motorcycling in collaboration with the Get On scheme on a geared motorbike firstly with a CB125F then after passing the CBT I would move on to an NC750S, which although this does sound fast it actually is sort of equivalent to a 500cc. So after indeed passing the CBT, with well, with ease, and passing the theory exam, with, well with ease, I moved onto the NC750S, which at first was daunting, it seemed so much bigger and how would it move off from parking? I suppose I find an aeroplane taking off daunting and never wish to sit at the back in case I get dragged along the floor without the pilot noticing, alas, it did move off with me on it and my car park practice proved quite a breeze. I did perhaps stop without my rear brake once or twice and the bike did start to tipple however, on the whole, my figures of eight were quite a delight once I had to learnt to lean to the right – one of those aeroplane dilemmas again – surely I would just tip like a cow? 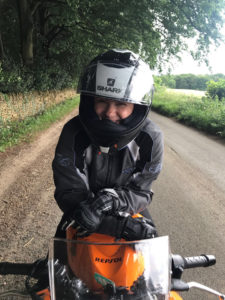 Whilst gravity still plays havoc in my mind, I passed the Mod One exam in a large car park (completing an exercise of 6 components – emergency stop, avoidance, slalom, figure of eight, parking, U-turn), the only thing to do next would be my Mod Two: riding on the roads section of the exam and put all this bike control to test with the highway code and living things… and fast things moving around you.

All was going well until the 10 minutes of self-direction on the road was announced. “Follow signs to Farnborough” was what stumped me. From there all manner of mistakes got made – in one junction. A darned roundabout.  Three mistakes on one action. Instant fail. (However, I re-took my Mod Two exam last week and passed).

Between failing my Mod two and passing it, I had taken a trip over to the Isle of Man TT to see how the fast guns do it, racers riding along roads (closed to the public of course) at speeds of 170 mph, where normally it would be 50, shook me to the core, establishing a ‘kill switch’ in my brain, it also made me realise how utterly thrilling it is to ride a bike.  I managed to take a bike out for a ride on the island (with a qualified Honda instructor as still not fully fledged biker yet) and the attitude towards me as a new rider on the Island was sublime. We rode around for quite a few hours (partly on the race circuit which made me understand quite how treacherous the course could be) and didn’t even make a mark on the petrol tank indicator – a few hours without a hint of petrol use.

My confidence on the tarmac had improved tremendously during this ride out on the Isle of Man so on return to the mainland to re take my test, I realised I was fluent at the gears, the attitude needed to ascertain road confidence and understanding of junctions and main roads – as a motorbike rider, gave me that well needed boost to allow me to pass.

There are so many benefits to riding a bike – from price and commuting to freedom and environmental concerns: If 10% of drivers moved to riding a motorbike then 40% of congestion would be reduced, 20% more people would be able to park and there would be 10% less stressed commuters on the roads. It would save 4 days of traffic jams, saving 1.708 hours of traffic standstill in your lifetime. 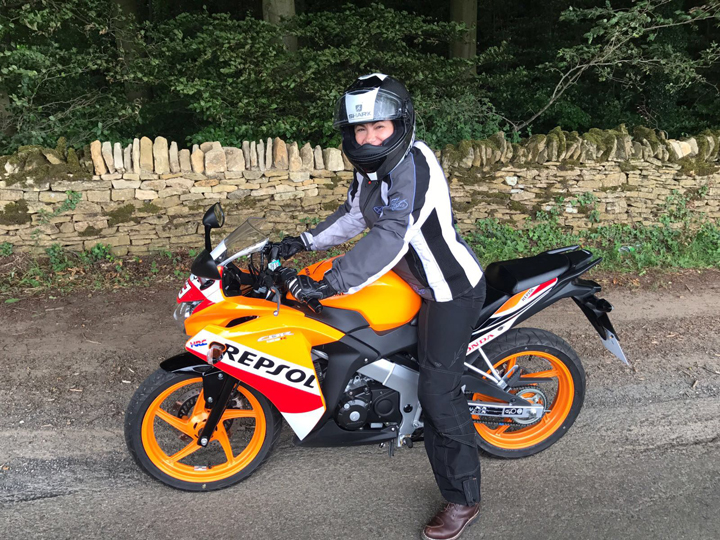 Not only can riding a bike dramatically reduce your carbon footprint it reduces your travel cost significantly. From 1p a mile on an electric bike to getting between 120-150mpg on a fuel powered bike. For example, a regular commute from Guildford to London, a season ticket is approximately £400 per month whereas leasing a Honda CB500F – a good example of a good looking and practical commuter bike, would be from £79 per month doing 150mpg for each trip. To accompany that there would be easier parking, remember you can park three bikes to every one car.  But yes, I am confusing commuting by train, to car and to motorbike, and carrying luggage on a motorbike along with weather conditions can all be rather a strong argument for sticking to the train or dare I say it  – car, however, riding a motorcycle may be the answer to being less stressed every day.  It is most certainly a glorious way to travel for a jolly, escaping to places knowing you are not causing too much damage to the environment.

Now I have a motorbike license I think this might indeed change that balance:

The only reason I can find to not date me is:

It is fairly easy to start your motorcycle journey. Just click here to find out more: http://justride.honda.co.uk/

Go on, give it a try.   ….Next time find out what back packs I find to carry your essentials…. And see if I have found a boyfriend yet…